Can You Freeze Dry Bell Peppers?

The answer is a resounding yes!

I love to freeze dry bell peppers. Gardens and produce in general seemed to do well this season.  With a HarvestRight Freeze Dryer when someone offers you their abundance, there’s no reason to turn it down!

We were able to get a couple of boxes of bell peppers, green, red, yellow and orange.  I was excited to see that I had every color of bell pepper there was!

But, I was wrong.

I learned (even though you may not see them in our stores) there are also white and purple bell peppers!  They are all actually green peppers at different stages of ripeness, depending on the variety!   They all taste pretty much the same, except green peppers taste a tiny bit bitter because they’re picked early, before being ripe.

Some green peppers ripen to yellow, some to orange or some to red or variations in between.  The ripest ones are the sweetest.  Most everything sweetens as it ripens and nutrition content increases with ripeness.  A large ripe bell pepper actually contains 3 times more vitamin C than an orange!

Vitamin C is what helps your body produce collagen,  a protein that holds your bones, skin, tendons, ligaments and connective tissues together.

Bell peppers are all very nutritious and are loaded with lots of vitamins and minerals.  Besides the vitamin C advantage, they contain carotanoid content which has great health benefits, especially those that fight macular degeneration and cataracts.  So, next time you make a relish tray, there are a lot of reasons to add a little more color!

Bell peppers are also called “sweet peppers” or capsicum.  They aren’t spicy because they don’t contain any capsaicin which gives other peppers the heat.

Annnd — here’s one that will blow you away!  They’re a vegetable, right?  Nope, they are a fruit!  That’s one fruit I don’t believe I will be putting into a dessert any time soon!

Stock Up On Bell Peppers

In the past, I would always make sure I bought extra bell peppers when they’re plentiful (since I can’t seem to grow them here in the mountains), so I could have some frozen diced peppers in my freezer.  That was always nice and convenient and they only take seconds to thaw for a quick omelet or any other dish.

It’s hard to believe, but I never had bell peppers as I was growing up.  With 4 years in the Navy during WWII there were a few things that my dad had to eat nearly every day and consequently he couldn’t stand to be around those food items afterward.  One of those was Peanut butter and another was Spam.  I’m not sure where his dislike for bell peppers came from, but it seemed to be included.

So, until I was married, I had never even prepared a bell pepper!  But I had eaten them on relish trays dipped in dressing and I thought they were great.  The way you prepare them for freeze drying is the same way as for any other food application.

How Do You Prepare Bell Peppers For Freeze Drying

First, when you bring them home, don’t wash them!  They like to be cold in the refrigerator, but need to be dry.  They do like humidity so you can keep them in the plastic bag you bring them home in (if you make sure they’re dry on the outside).  Put them in the front of the crisper drawer and they should last 2 – 3 weeks.

When you’re ready to prep them for the Freeze Dryer, then wash them.  For some reason bell peppers seem to have a greasy feel.  It may be their natural coating but they are also handled a lot between picking, packing, loading, stacking, etc.  so I feel better washing them good.  Just run them under water, but rub them with your hands all over. 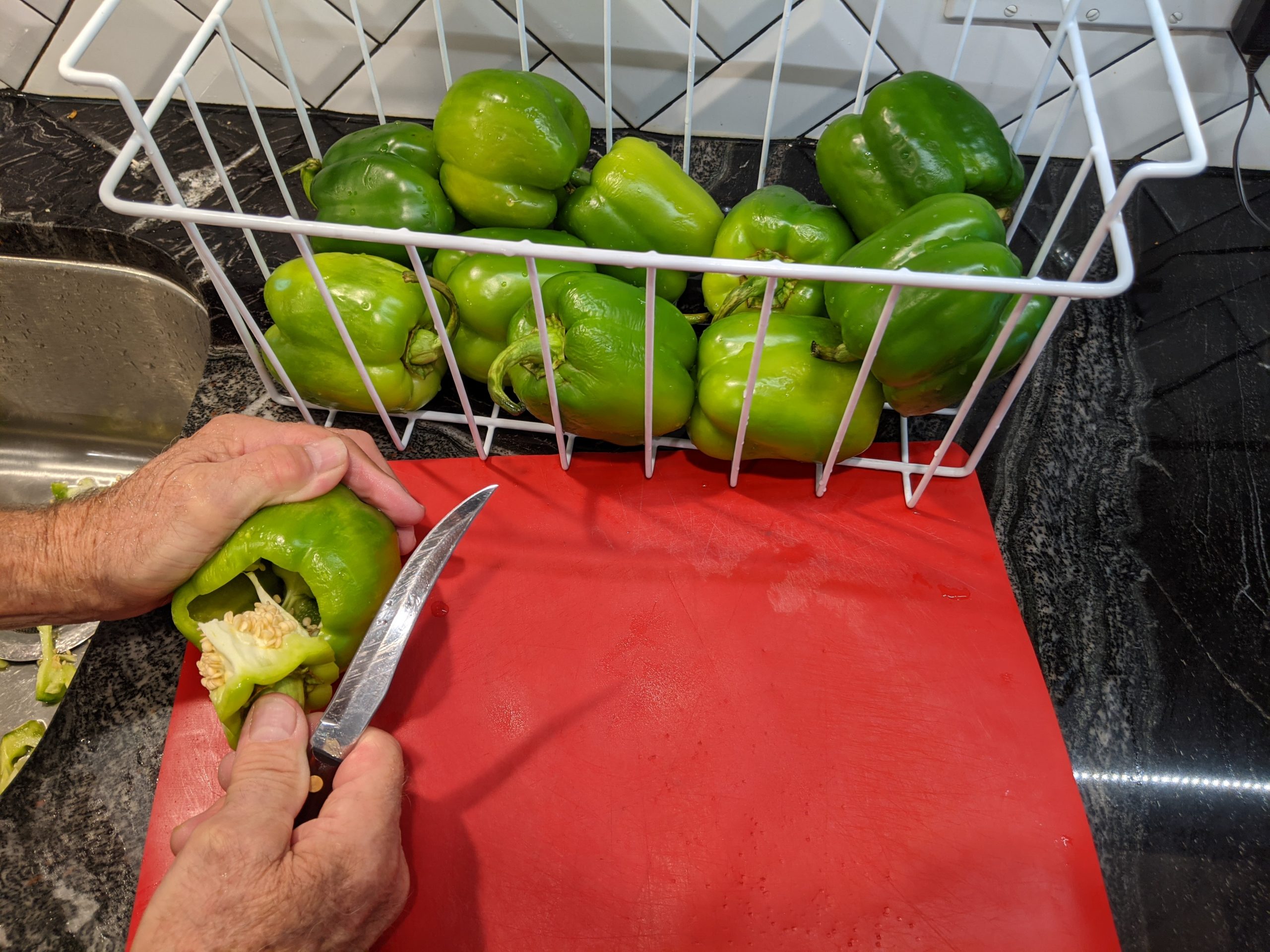 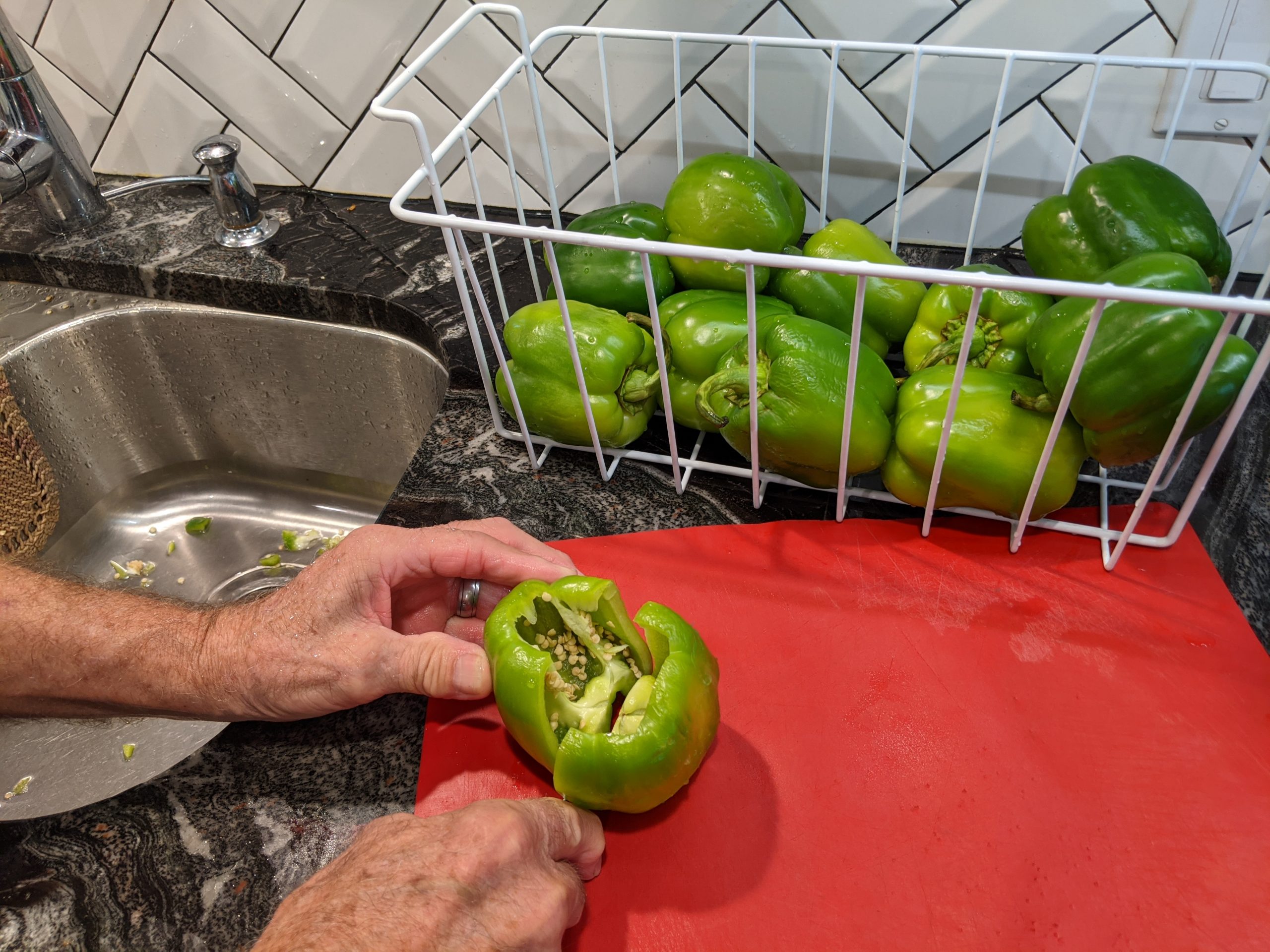 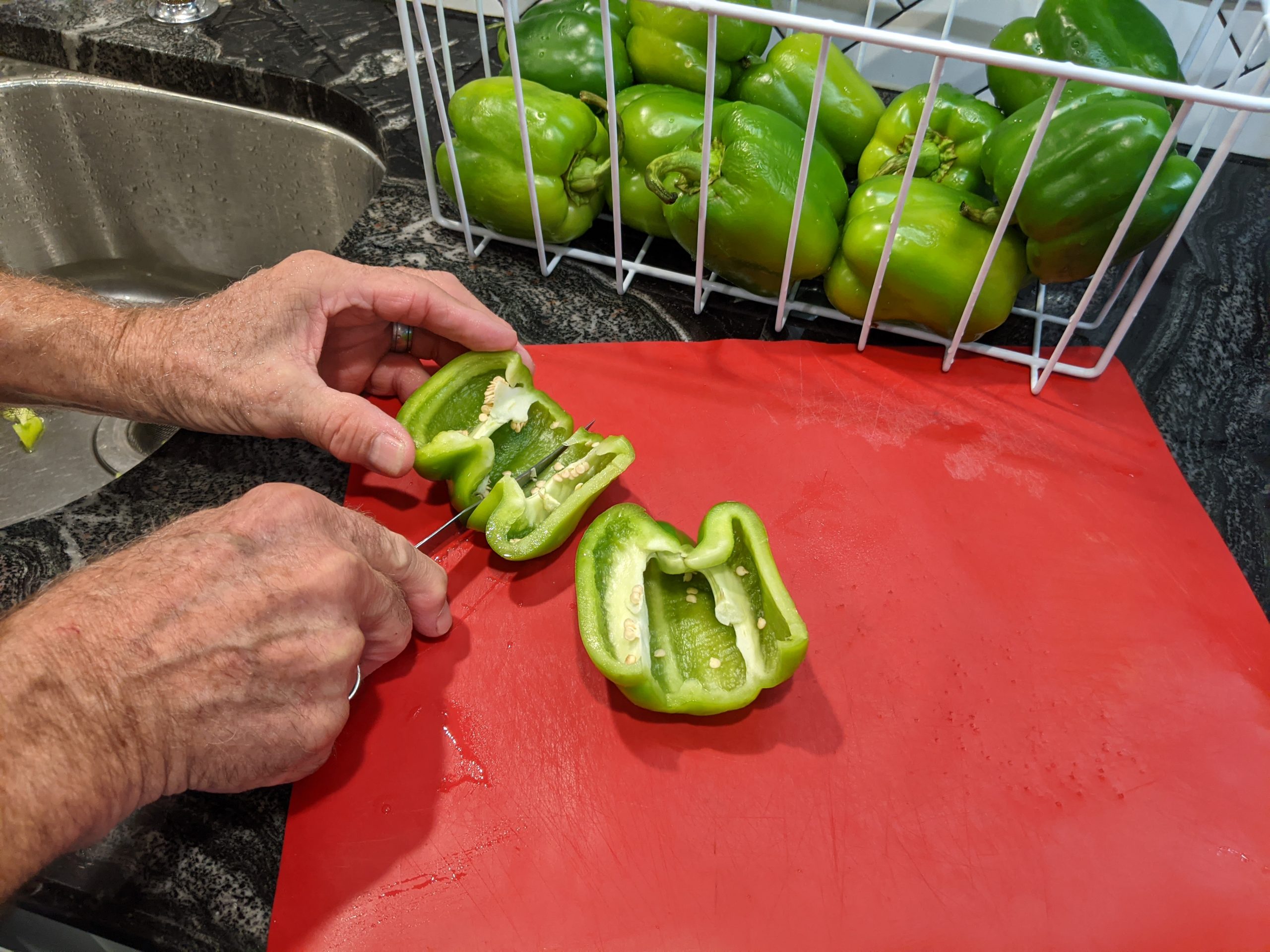 Cut out the top with the seeds attached, this will remove most of the seeds.  Then, slice them in half, then in half again. 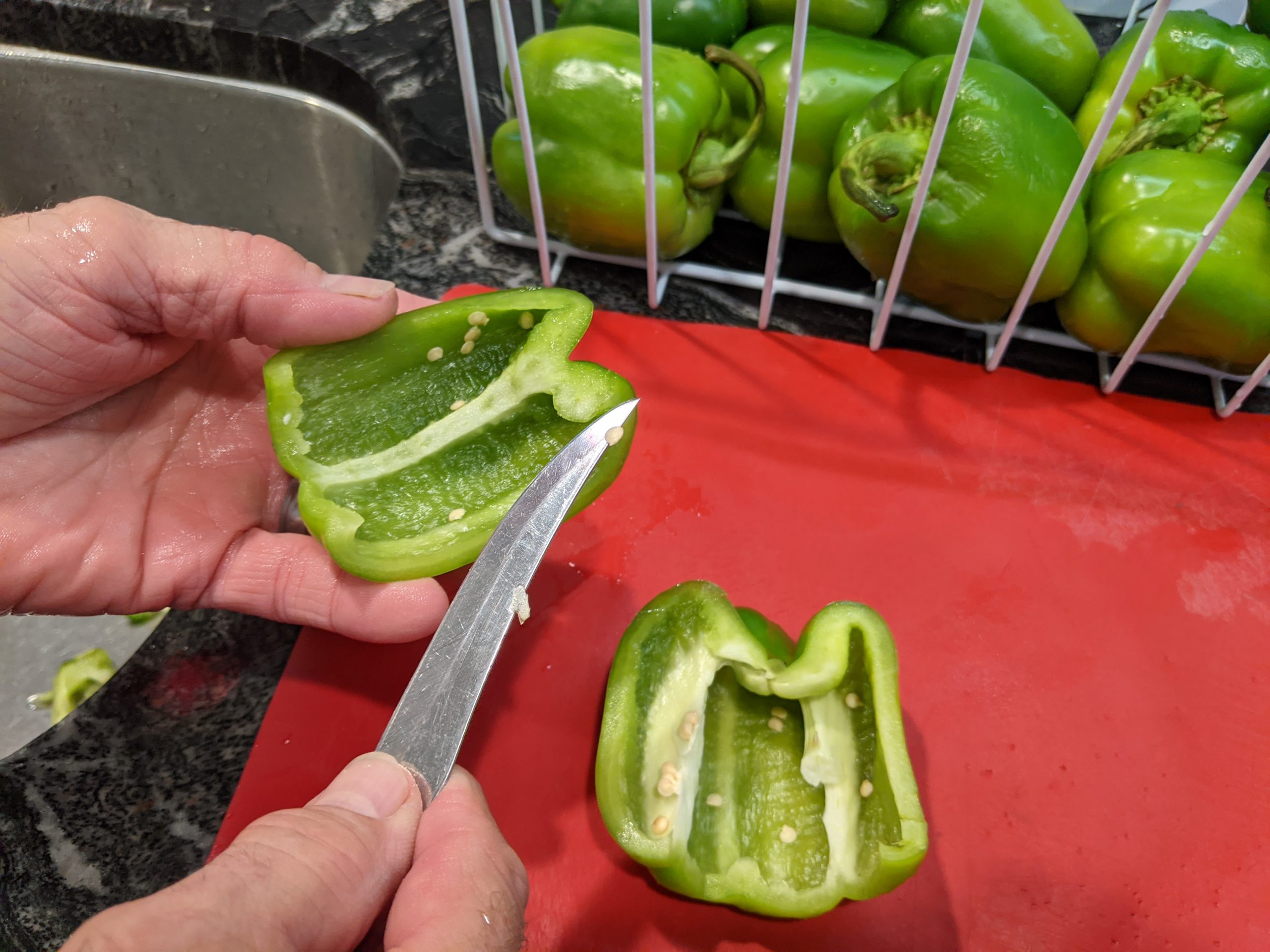 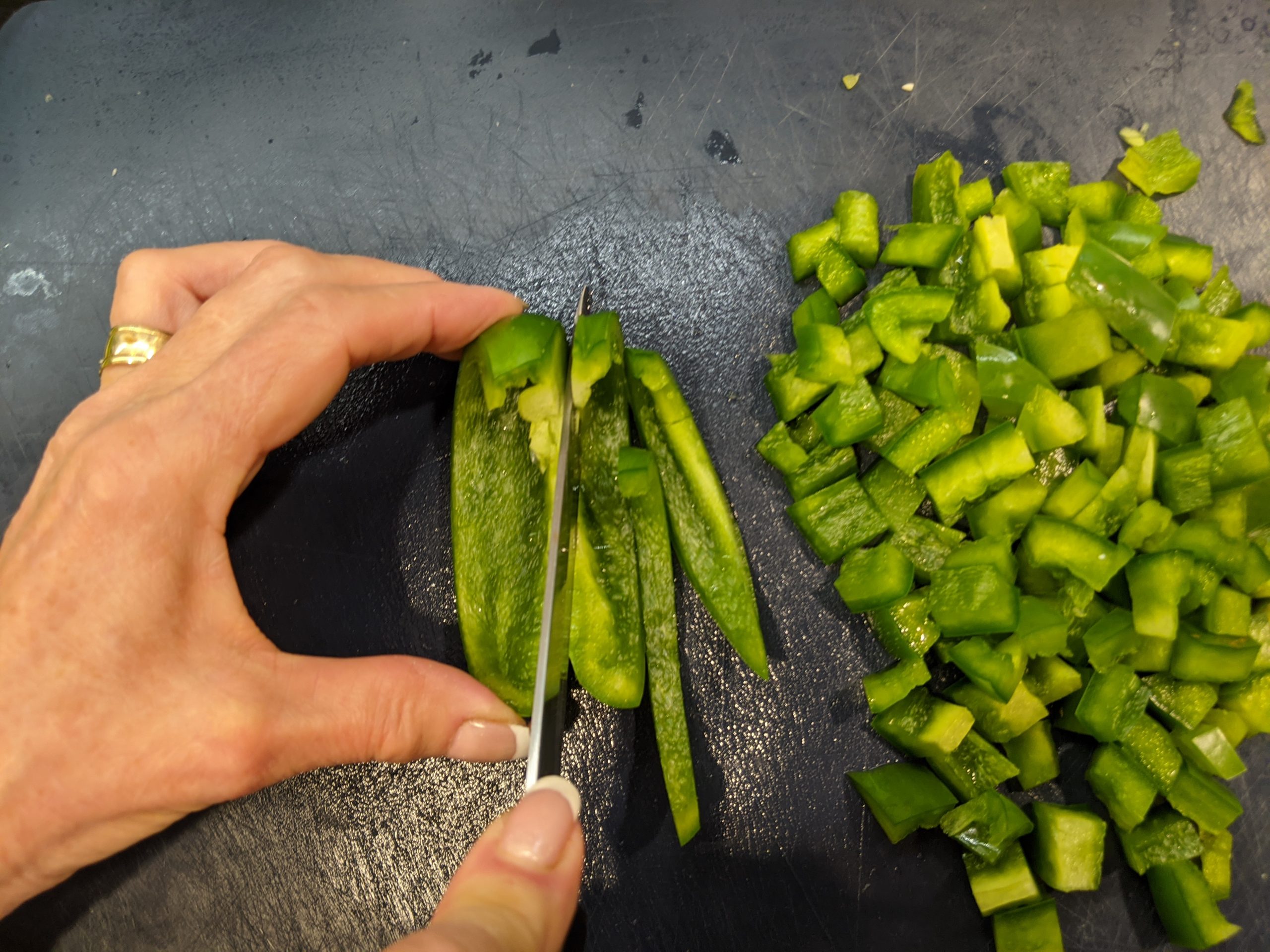 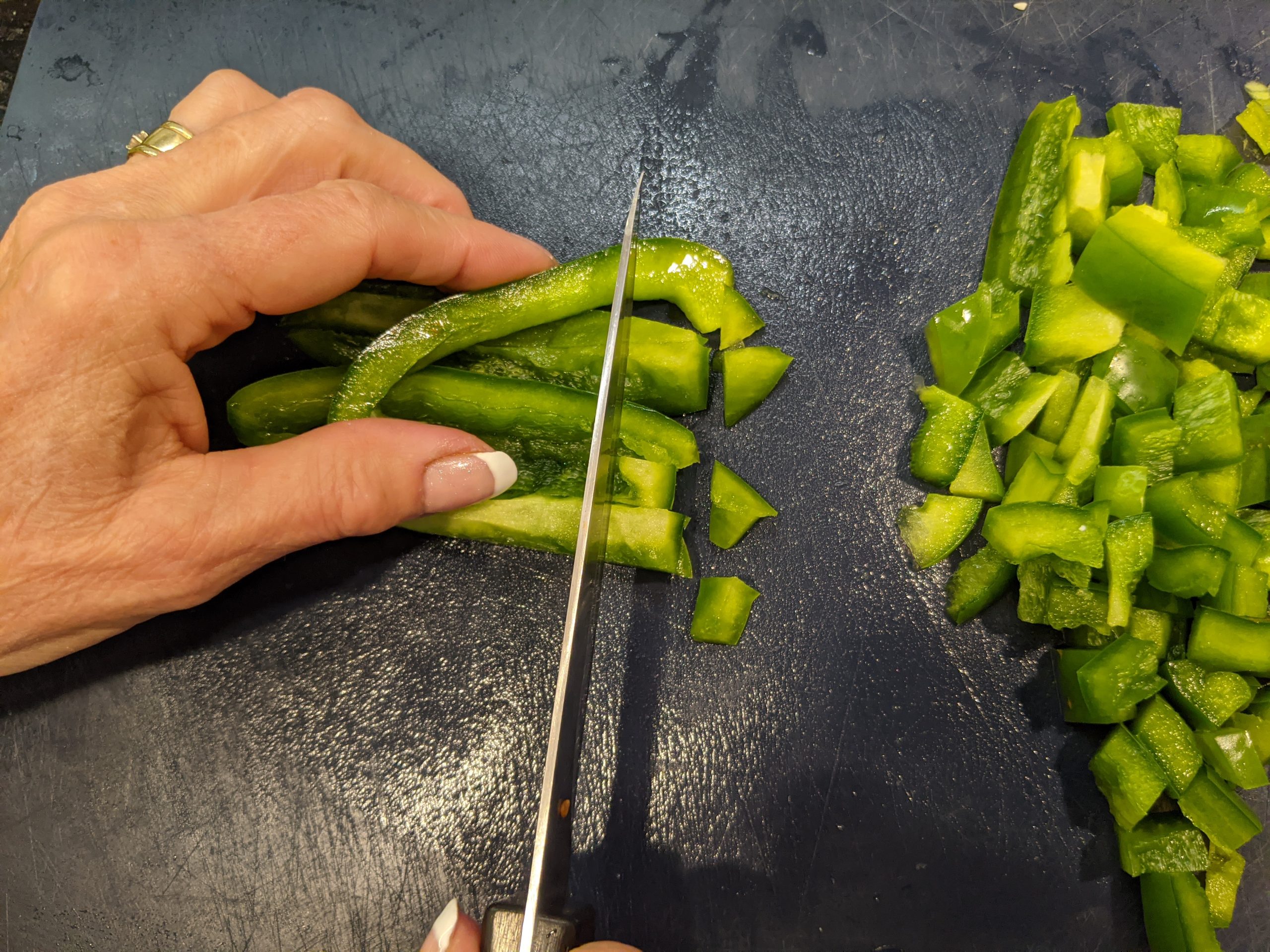 Cut out the  membrane and rinse away any elusive seeds.  Then we sliced them into strips before chopping into chunks. 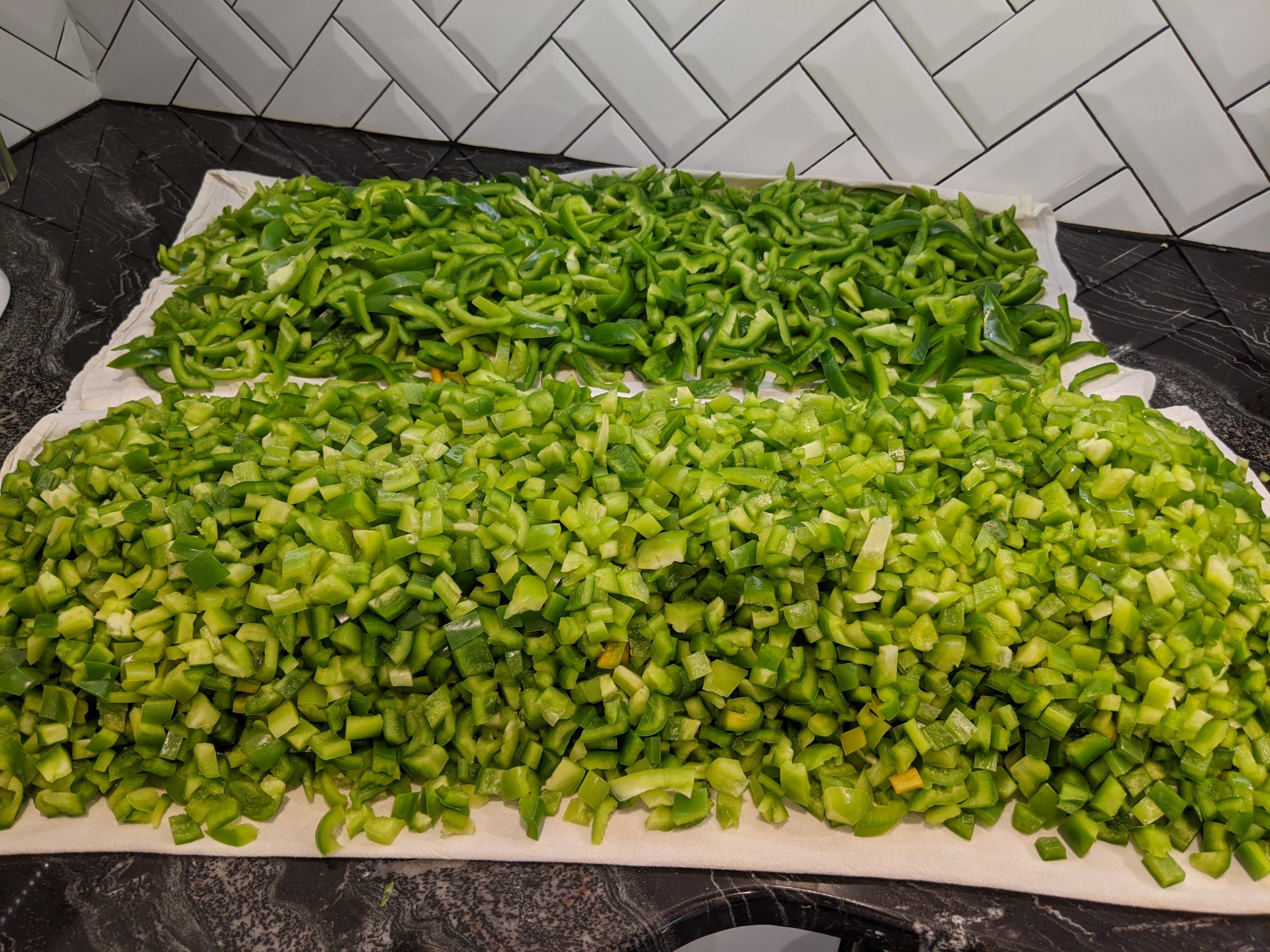 Green peppers chopped in front, sliced in back. 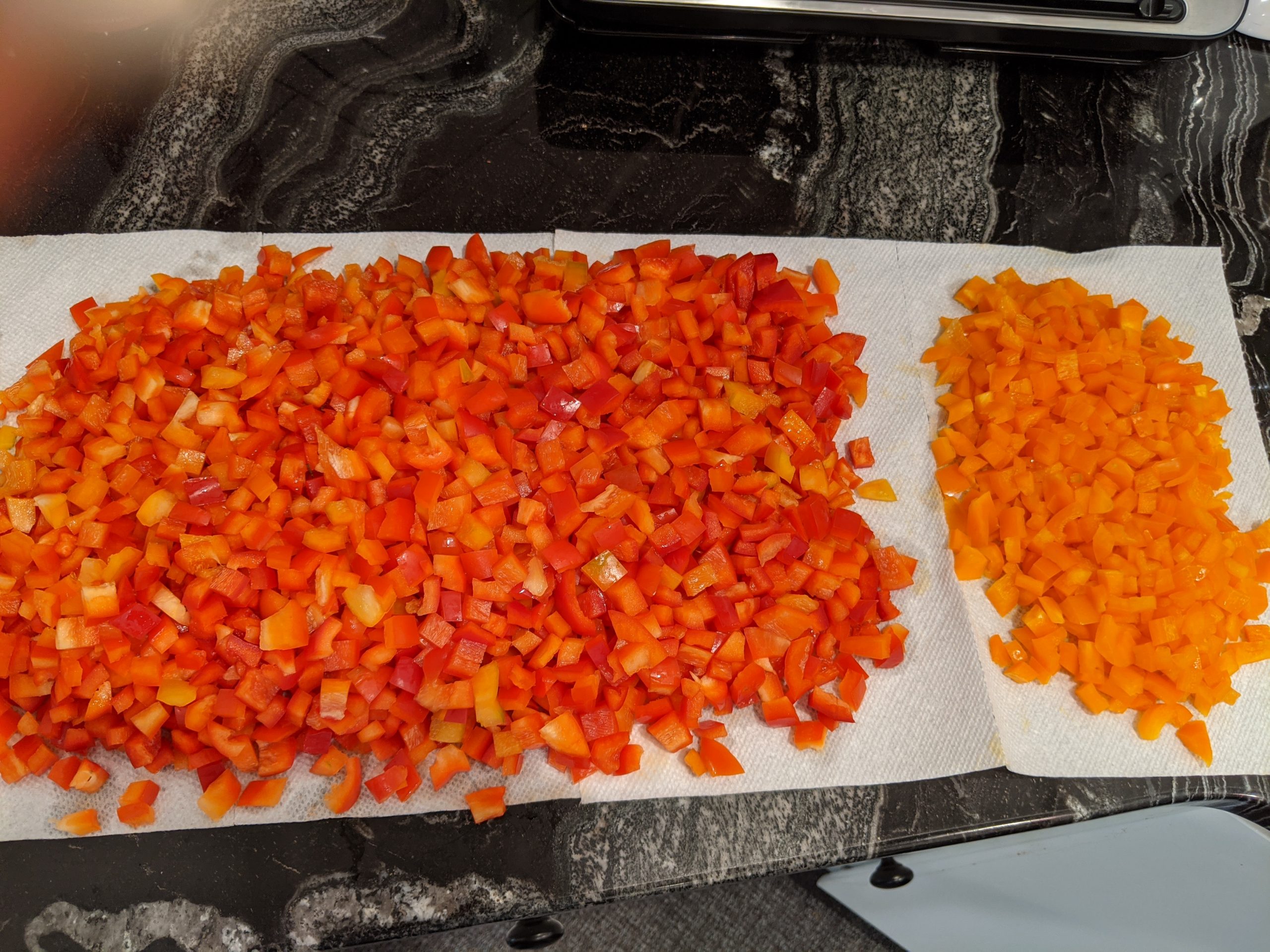 Because there were so many peppers and knowing that I can never use that amount, we chopped a lot of them to freeze dry and share with the rest of the family. 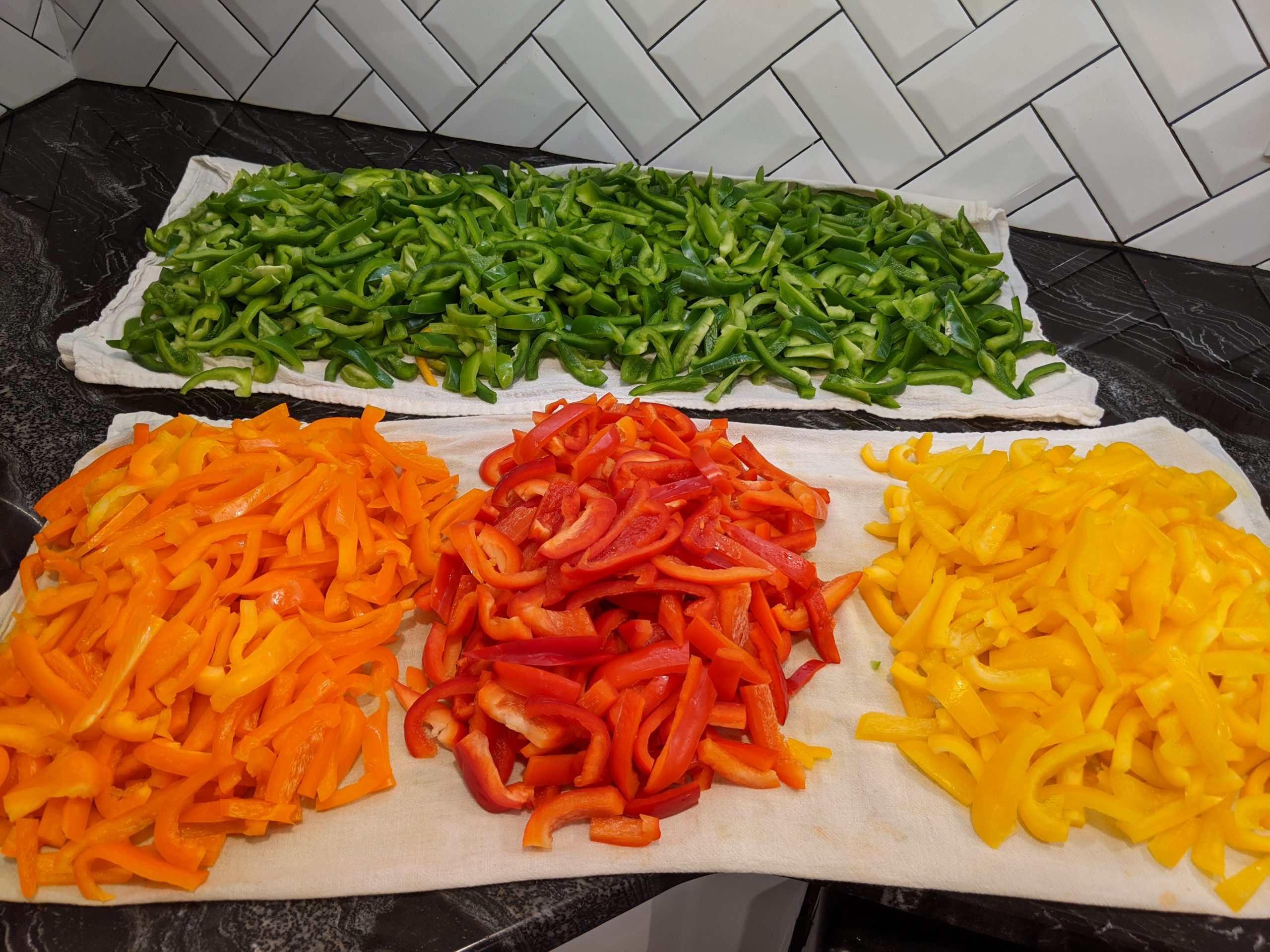 For about half of the peppers, after slicing them into strips, I cut them in half to make Fajita fixins (I want to say Fajita veggies)! 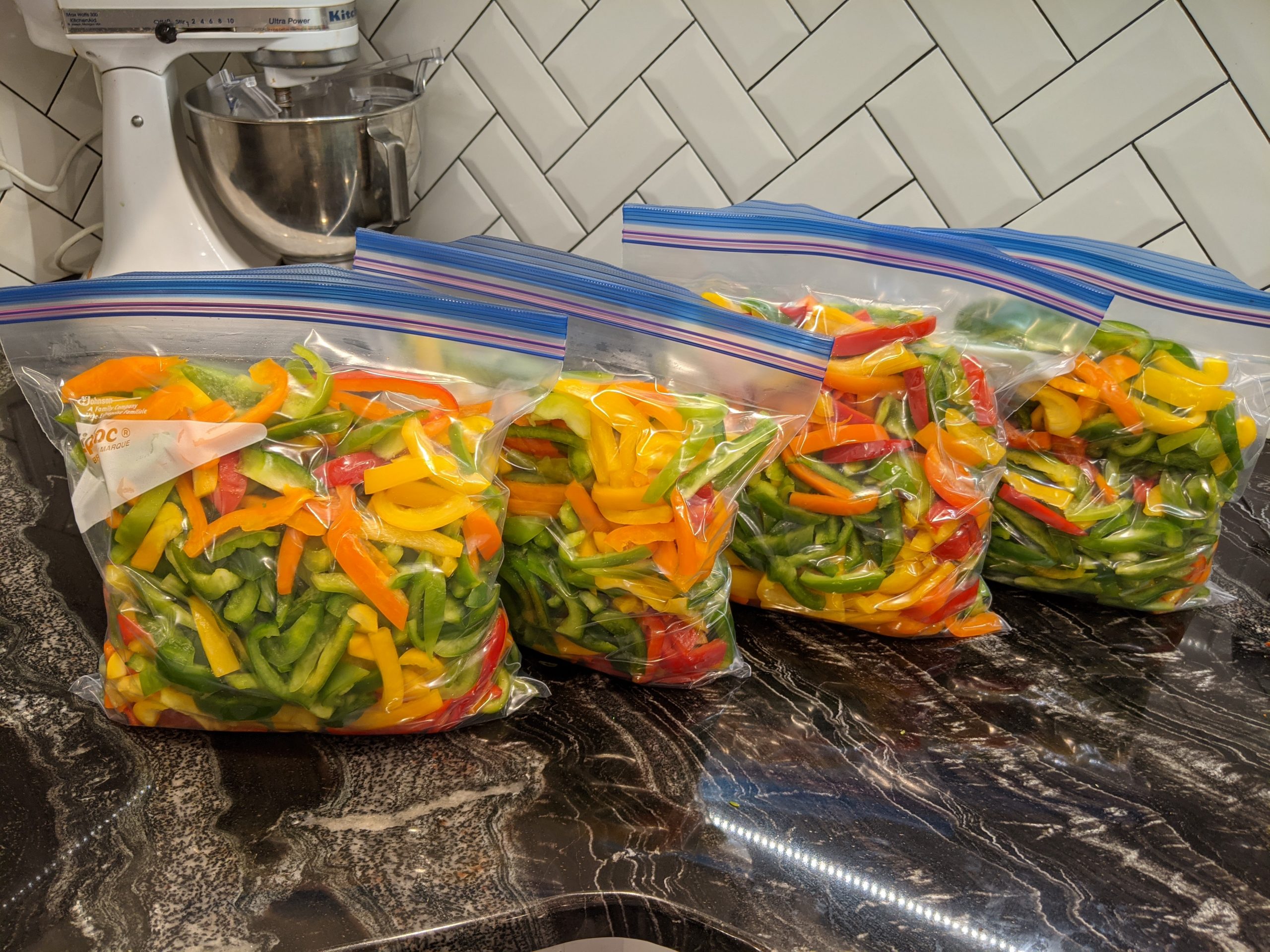 How To Pre-Prep Bell Peppers For Freeze Drying

I mixed all the colors together in gallon zip lock bags to pre-freeze before freeze drying.  Because I have already freeze dried a whole bunch of onions and rotisserie chicken that I can add later for the Fajitas, I’ll just freeze dry them all separately.

Speaking of Fajitas, which is one of our favorite family meals, be sure to stock plenty of flour tortillas if it’s something you want to have too.  I keep them in my garage refrigerator in the crisper–they last FOREVER!  And you will want to store your favorite Fajita Mix packets or at least have the ingredients to make your own.  I will share a good Fajita Seasoning recipe with you in the vault. 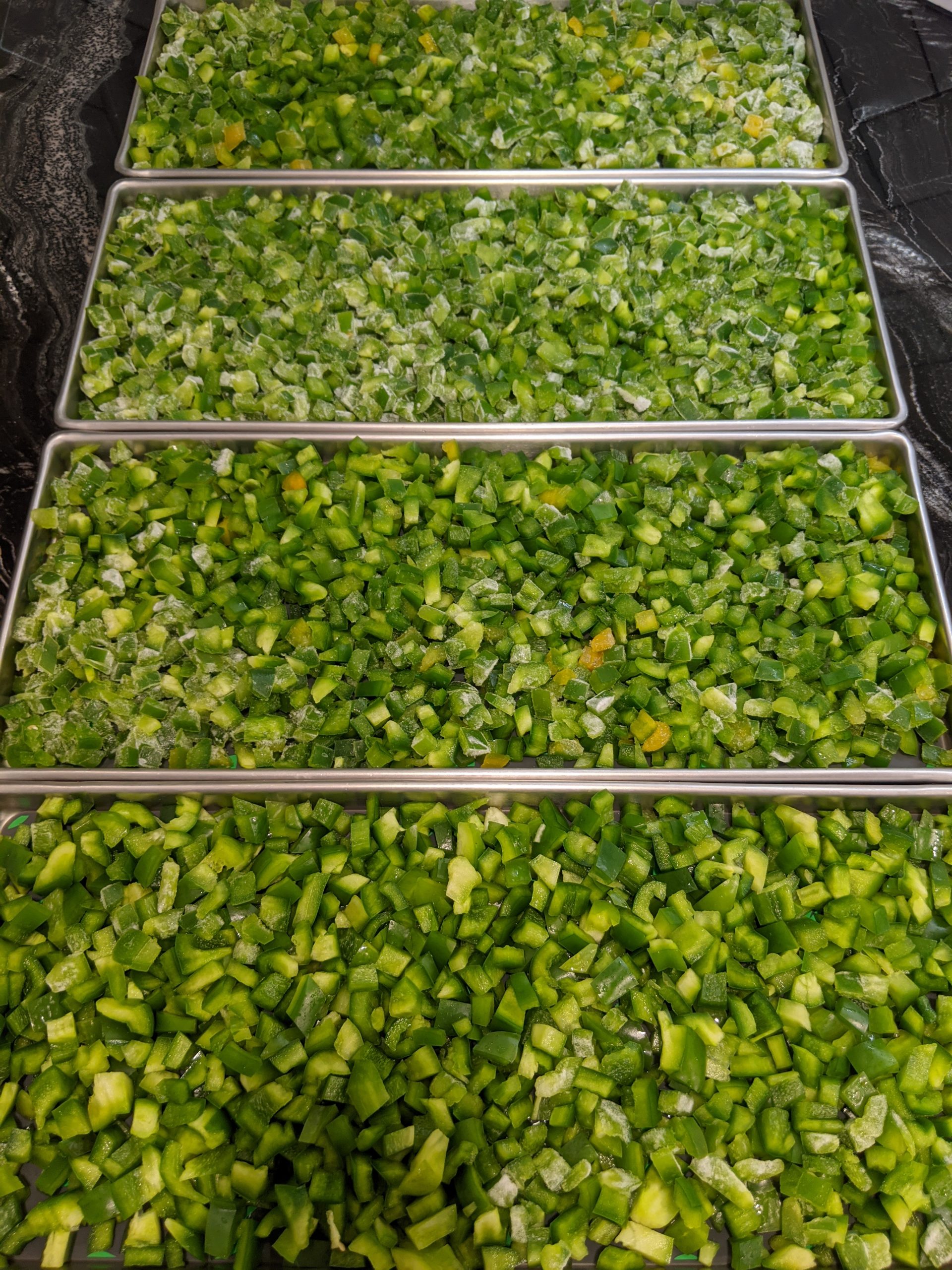 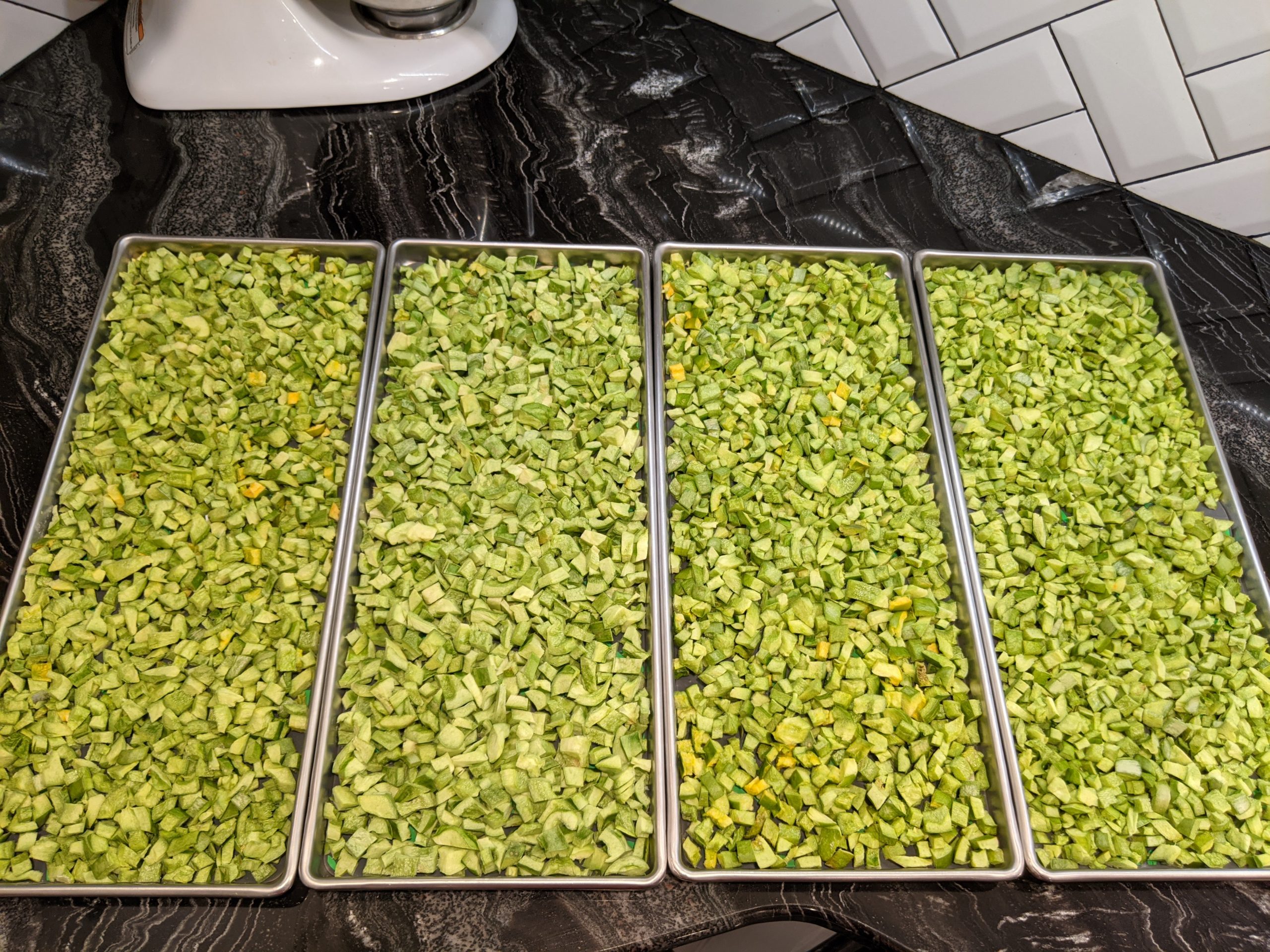 Here are the first chopped green bell peppers ready to go in the freeze dryer and an after picture of them as I took them out.  They are so flavorful and look beautiful.

How Long Do Bell Peppers Take To Freeze Dry

They took 31 hours and 38 minutes.  Each tray filled a quart mylar bag, so I got 4 bags from 4 trays.  I have the rest of the chopped peppers in gallon zip lock bags in the freezer.  Even though they are damp when you put them in, they break apart easily in order to put them on your trays, so you don’t need to freeze them separately on cookie sheets before putting them in zip lock bags to pre-freeze.  Each full gallon zip lock filled 4 medium trays nicely. 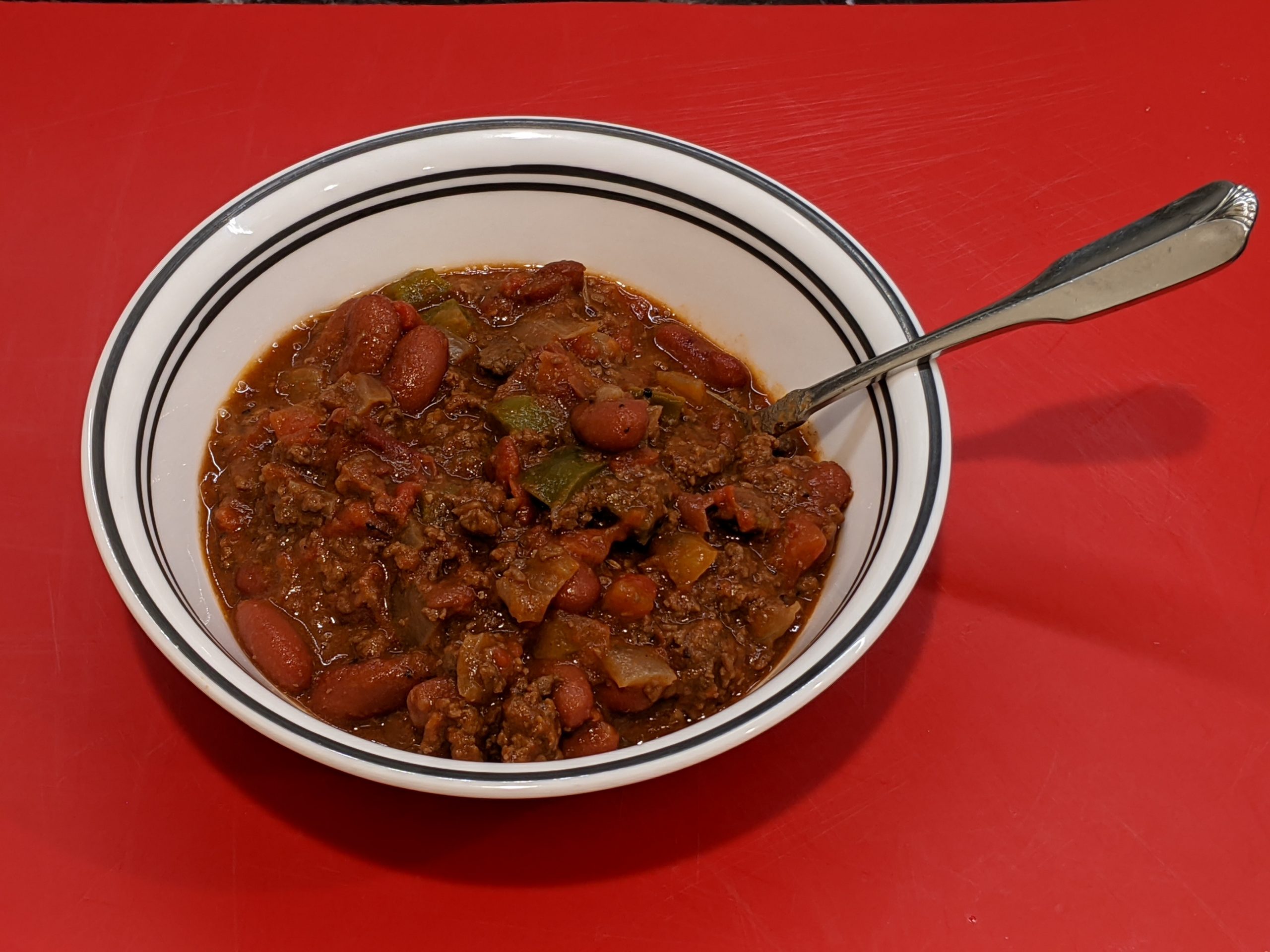 What Can I Use Freeze Dried Peppers For?

In between prepping bell peppers I did use some to make a pot of homemade chili that always warms the soul when you’re working hard.  It’s from an old Crock Pot recipe book.  You can find a copy of it in the vault also.

Well, as you can probably tell, we “chopped” til we dropped!  But, what a great feeling it is to have all that nutritional food stored and to know that it will be good for the next 25 years!

HOW DO I FREEZE DRY BELL PEPPERS?

Then a vacuum pump turns on and creates a vacuum inside the drum. This is the drying stage and will vacillate the heat of the tray up and down to a pretty warm temperature. This makes the frozen items release any water in them in vapor form. The vacuum sucks the moisture to the drum. This collects in ice form on the inner circle of the drum.

WHAT SETTINGS DO I USE TO FREEZE DRY BELL PEPPERS?

On the Harvest Right freeze drier – this works on all sizes – after putting the trays inside the drum on the shelves, I put in the drum cover and then tighten the handle as I lock it shut. On the computer touch screen, I selected START > NON-LIQUID > NOT FROZEN (unless it’s frozen) > CONTINUE. After inputting the settings and making sure my drain tube was closed, I walked away.