Who doesn’t love candy?  If you’ve ever tried freeze dried candy, you’ll know why this is a must-have in my food storage.

I’ve had a lot of people tell me there’s no way you can keep candy good “into the end”. I’ve been told that sugary things are not good to store because the sugar content sucks up the water in the air and gets sticky and tends to get “juicy”.

You know what I’m talking about. It’s kind of gross.

Why does candy do do that?

The reason it does that is because the molecular structure of a carbohydrate (also known as a sugar) attaches to the hydrogen-oxygen bonds in the air. This makes them “moist” (yep, I put that word in there… sorry!).

When they attach to water molecules, that’s when they go bad. No one wants to eat a damp Skittle when you’re faced with other depressing things. We all just want a tasty treat to help us snap out of the hardships that are supposed to come with the “end of the world”.

Some people have decided they can’t take candy with them. They have decided that they must “survive” on wheat and powdered milk alone. Just thinking about it makes me NOT want to survive.

For everyone who thinks you can’t prepare treats for “the end”, I beg to differ. True, there are some candies that respond better than others to food preservation. This is frustrating to say the least. I mean, I tried freeze drying Dots, the gummy candies, and they did NOTHING, except get softer because of the heat. It was so uninspiring that I just let my kids eat them. They didn’t even notice a difference.

But not all candies are created equal. Some did surprisingly well! Freeze dried candy is definitely a great reason to try out a freeze dryer.

Since I got my trusty FD’er, I’ve tried a few things. You get to benefit from my experimentation. I’ll continue adding candy here as I try it. So check back often! 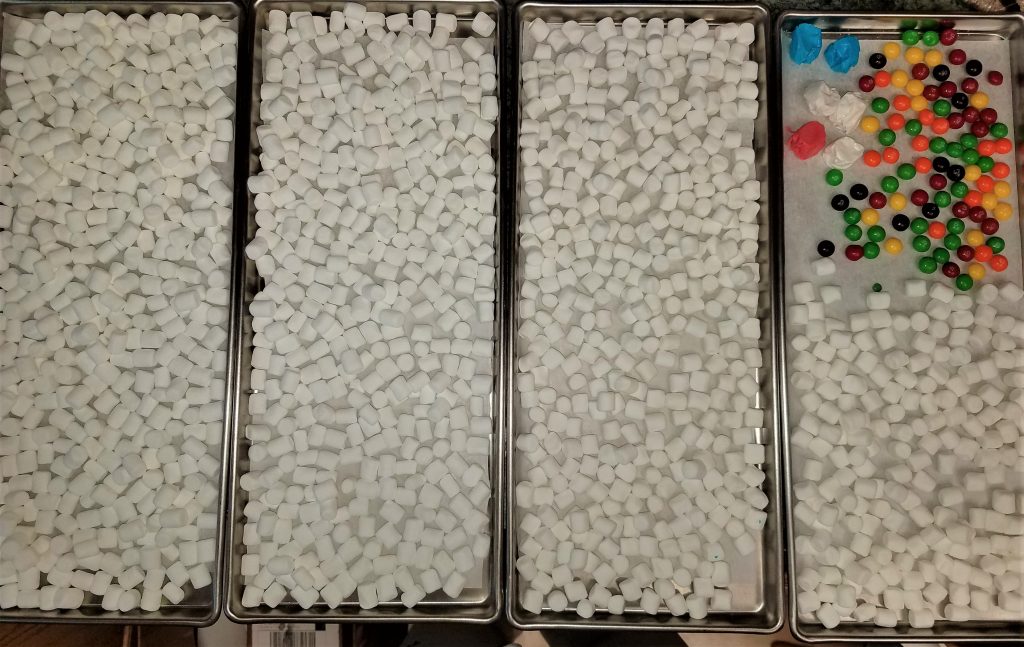 Can I freeze dry Tootsie Rolls?

I’ve tried various sizes because my kids don’t like them and they always get a TON when they trick-or-treat. They add them to my freeze drying pile and let me experiment with just about anything.

Here they are before they were freeze dried. You can see the glossy darkness of the Tootsie Rolls.

I separated them on the tray because as you’ll see later in this post, salt water taffy blew up, taking more space than they originally did. I didn’t want to have Tootsie Rolls stuck to each other. So I gave them plenty of space. Same as the Dots. 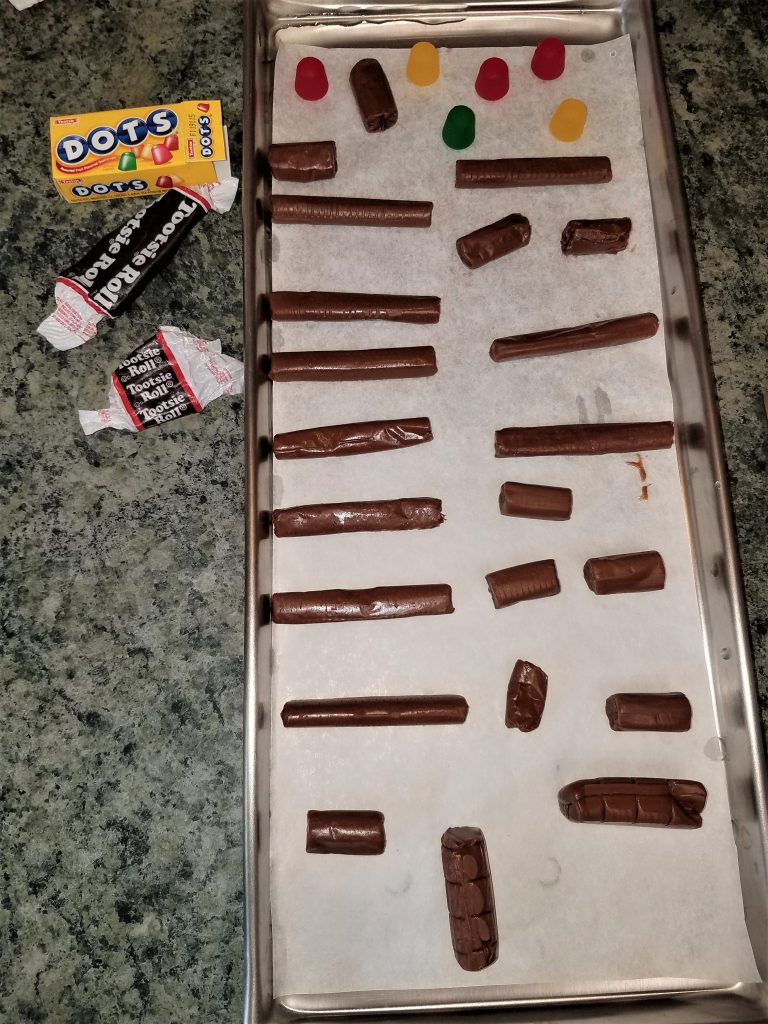 As you can see here, the Tootsie Rolls after being freeze dried are more like a wafer in a matte brown color. They’re extremely light and when you bite into them, they’re like biting the inside of a Whopper – almost like a malt ball, but not.

There is a very satisfying snap and crunch as you eat them and then they seem to dissolve on your tongue like cotton candy. 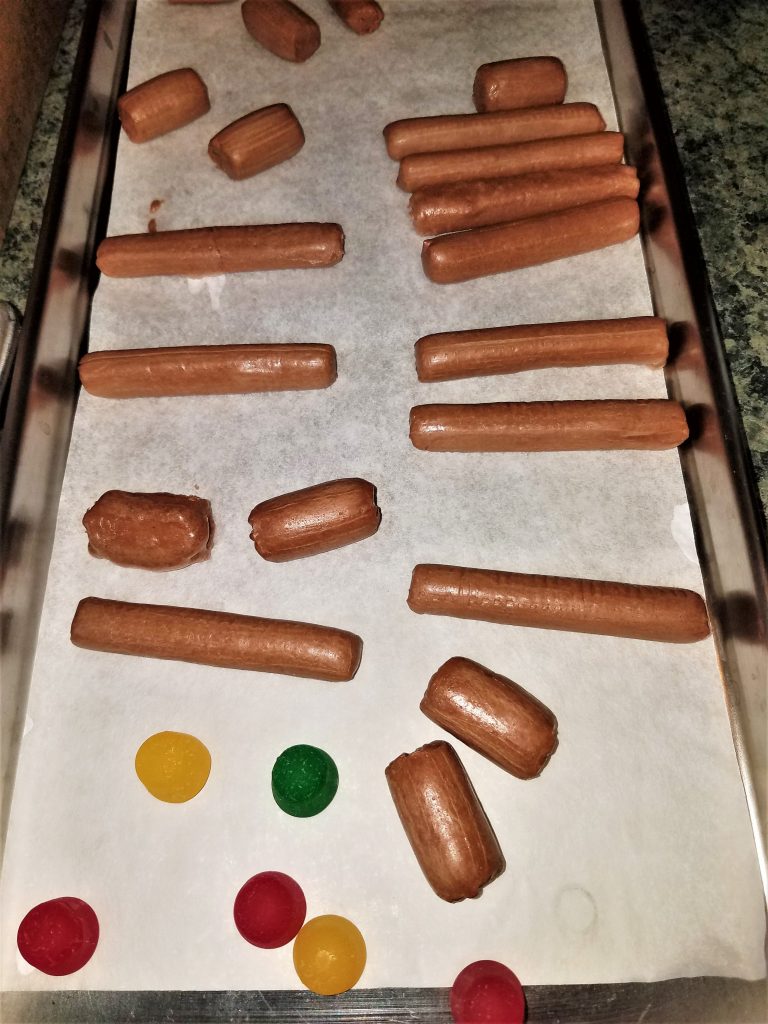 Can you freeze dry Dots candy?

The Dots were unimpressive. There was no change. They underwent the full 16 hours with the Tootsie Rolls and they didn’t hold onto their temperature even though they hadn’t changed. Usually if something isn’t finished freeze drying, they maintain the chill of the frozen water. These Dots did not have any temperature change.

Ultimately, I won’t be freeze drying them again. 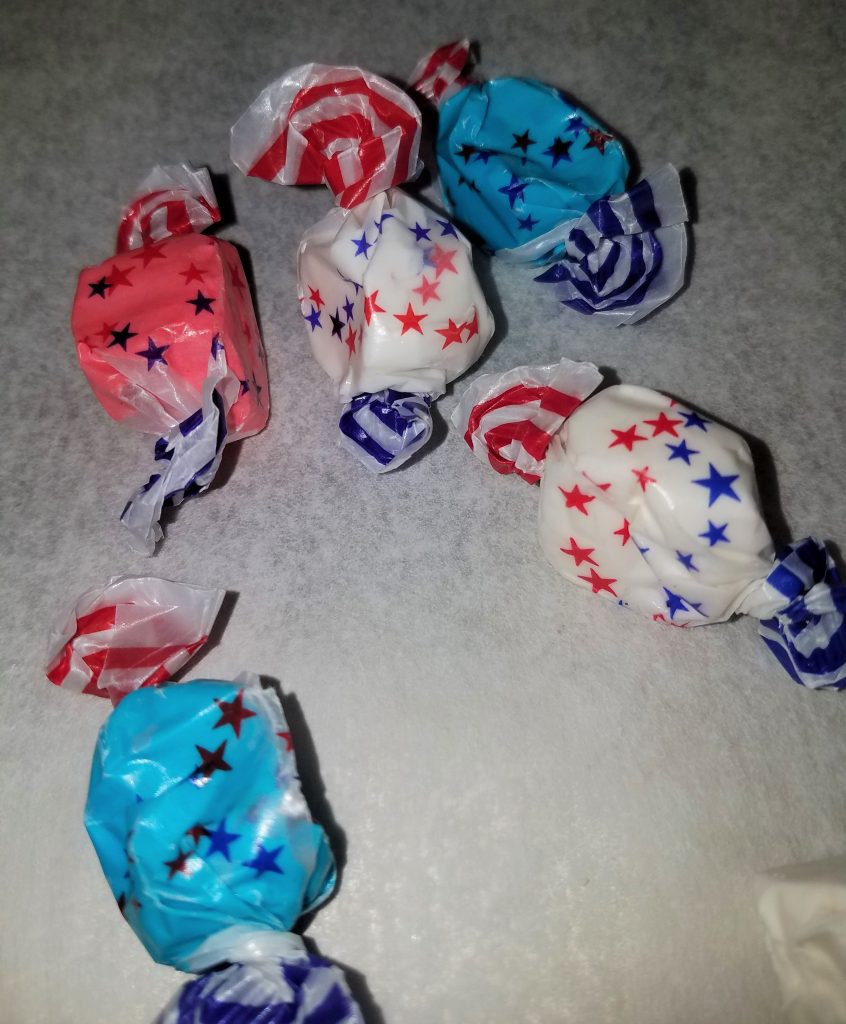 I love the weird softness of these candies fresh out of the wrappers.

You can pull them and twist them. They come in a bunch of different flavors and colors. My kids don’t adore them like I do, but that’s only because I haven’t had a chance to take them to the salt water taffy store in Seaside, Oregon. When I do, they’ll fall in love with them in their natural state.

As far as freeze dried candy goes, I was a little nervous to see what would happen to them. 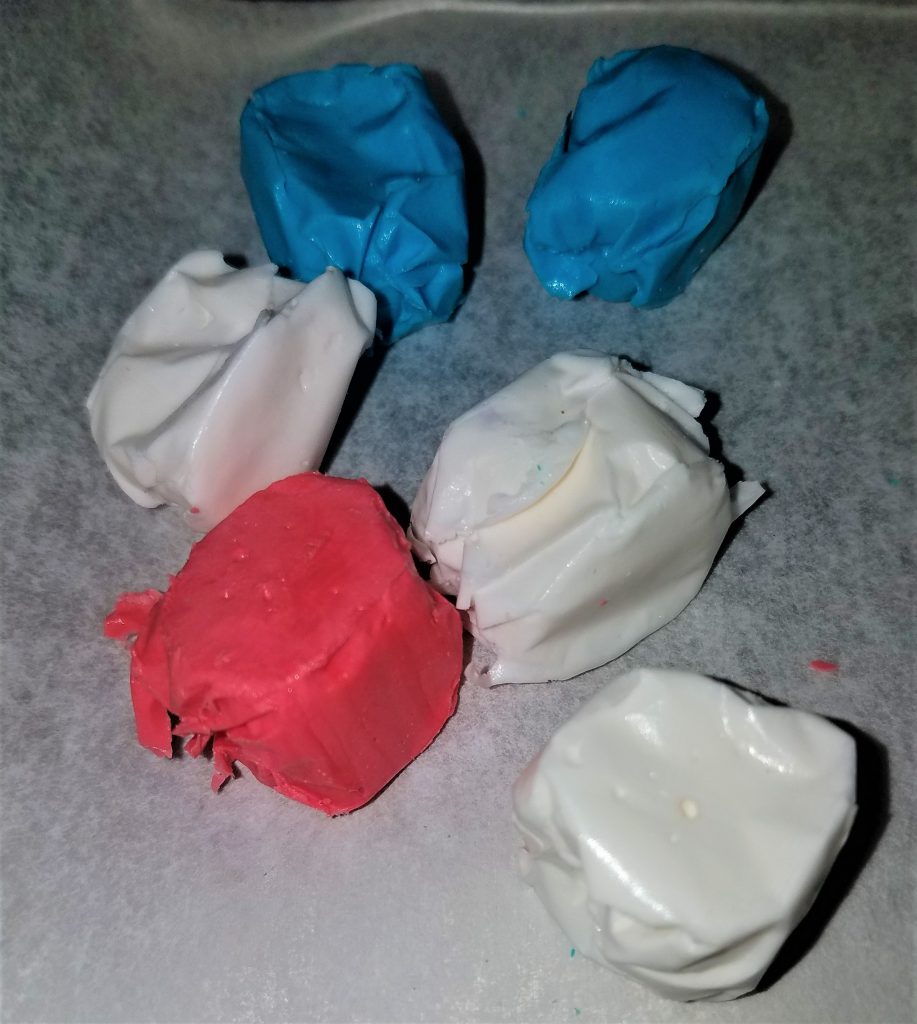 My youngest offered me his salt water taffy for my freeze drying experiments, so I gave him the first try at eating them.

These suckers are on parchment paper. I didn’t account for expansion and that was a surprise when I opened the machine after 15 hours to find them ballooned up.

Here they are after. 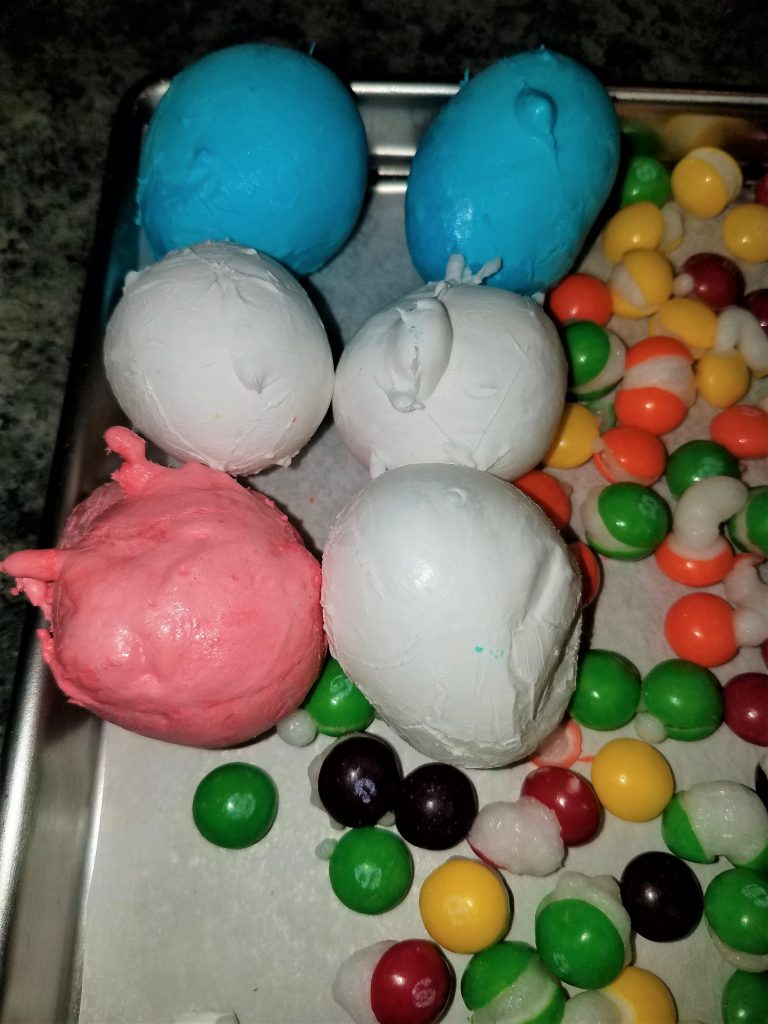 Isn’t that amazing? They grew more than four times their normal size.

When you bite into them they’re hard but then dissolve in your mouth like cotton candy but also kind of stringy. The flavors and color are still intact. There are little pockets of air inside, too, extremely small.

They were eccentric to eat and try, but we probably won’t do them again, either. Why? Because I like my salt water taffy stretchy and moldable. If I wanted to eat hard cotton candy, I’d consider the Tootsie Rolls above – they at least pretend to be chocolate.

How do I freeze dry Skittles?

You probably saw these suckers above on the same tray as the salt water taffy. These little rainbow bits were a surprise as well.

I started them on the tray with plenty of room – but not as much as I should have. 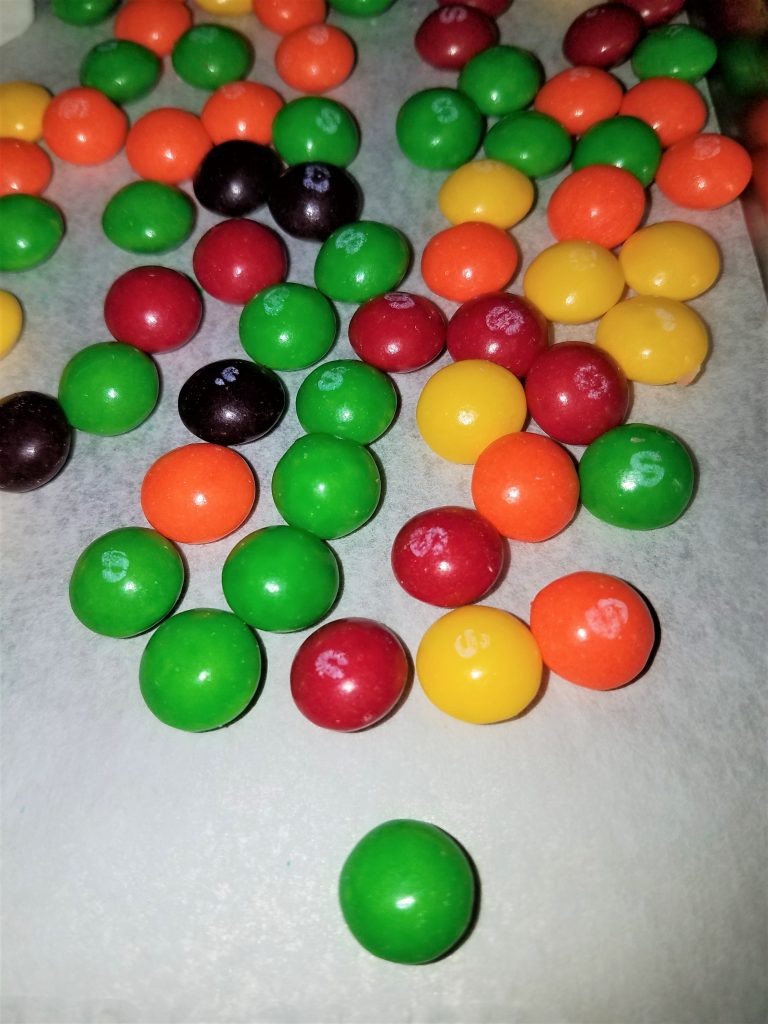 These expanded and grew. Their white insides burst through their hard candy shells.

When my son tried them he claimed they hurt his throat as he was trying them. Not always a good thing! But the flavor was enhanced. So there’s that. 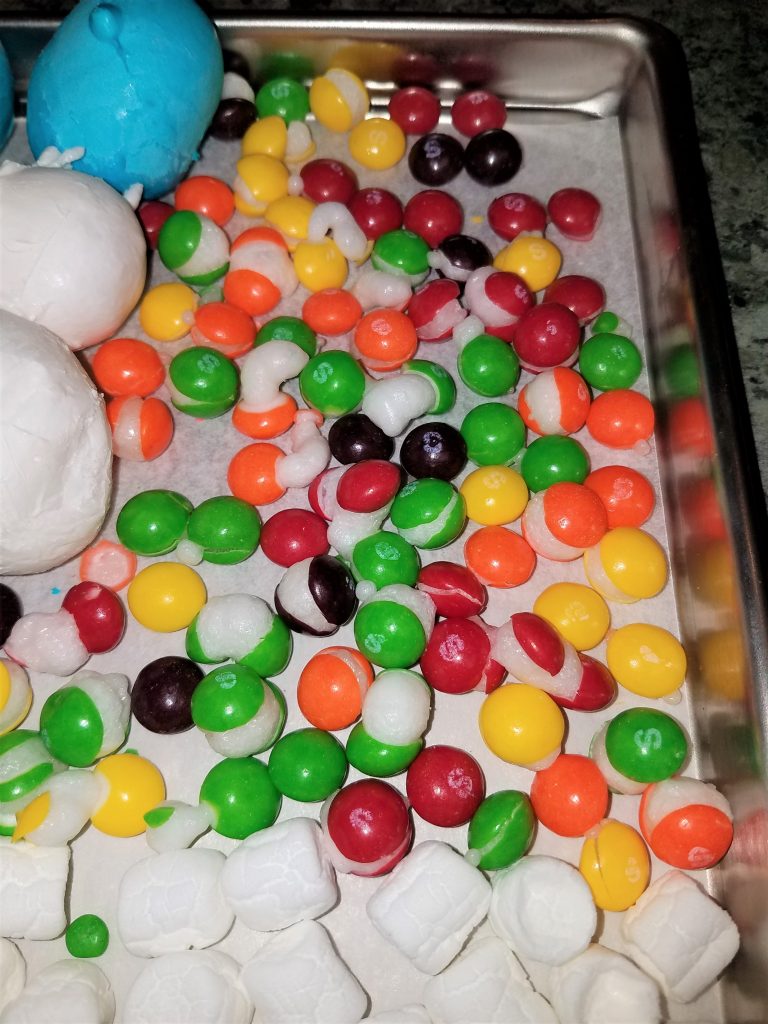 Their insides split the sweet candy shell. Definitely made them interesting. If you’re looking to try some without freeze drying them, you can check out this place that ships a fun package of them to your place. Freeze Dried Skittles.

Can I freeze dry Marshmallows?

Something I’m highly addicted to but can’t seem to keep from going bad in the bag (I get bags and bags when they go on sale and we don’t eat them nearly fast enough) are marshmallows.

I seriously can’t get enough. When my daughter and I went off sugar, these were the hardest things to continue having in the house. I figure if something happens, I won’t care what size jeans I’m in. You know, I’ll want a bag of these puffy pieces of heaven for comfort food. To be clear, I’m good with that.

I never thought I could freeze dry them!

Before: you can see these ones are fresh. They don’t stick to each other and they’re plump and fluffy. I want to eat one right now! 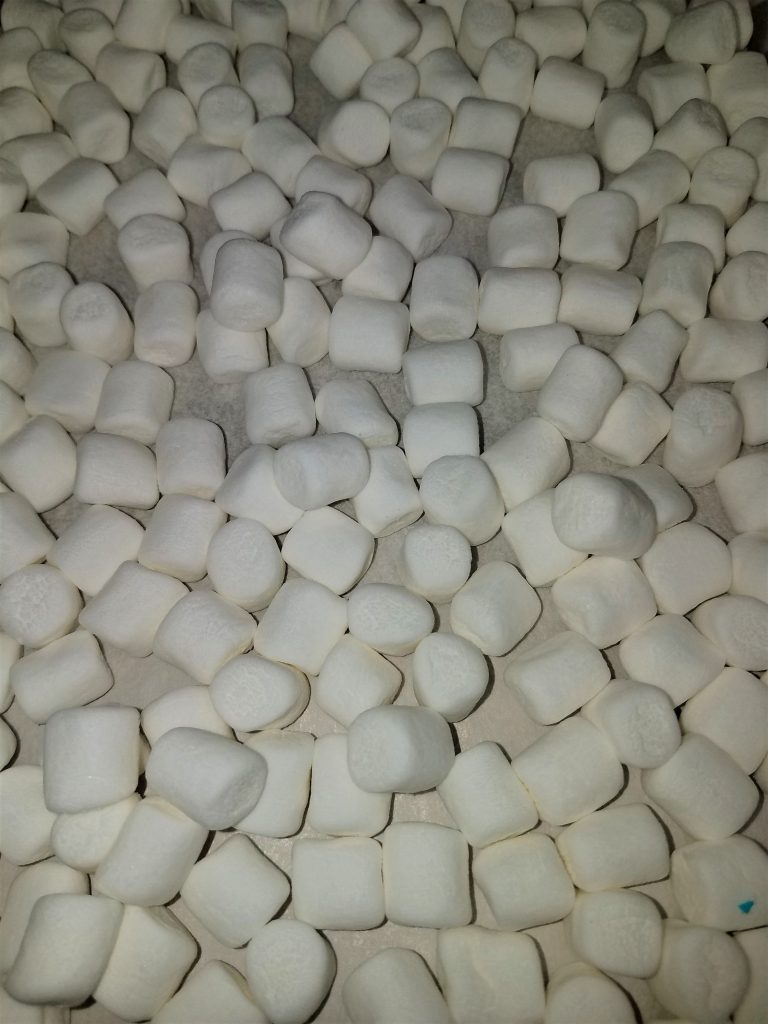 Then they went through the freeze dryer. I was a little skeptical. I’d heard that they actually turn out really good, but I love a good soft marshmallow.

When they came out slightly wrinkly, I doubted everything I’d heard. But when I tried one, they reminded me of the Lucky Charm marshmallows! Crunchy but flavorful without the artificial crazy flavors. Just the terrifically subtle marshmallow flavor. These marshmallows are like the ones that you find in the hot cocoa mixes with added mini marshmallows but bigger!

They’re a little wrinkly, but they don’t stick to each other and they won’t. Whew! I have to admit they’re perfect and I can’t wait to try them later!

As far as freeze dried candy goes, marshmallows are winners! They can work in other ways, too!

The Great Value Brand marshmallows at Walmart was NOT good. They were chewy even though they were done. It was weird. But the generic brand at WinCo was awesome. Perfect and delicious. That’s what the ones pictured below are. And Winco has some great prices on their marshmallows most of the time – especially as it gets close to holidays. 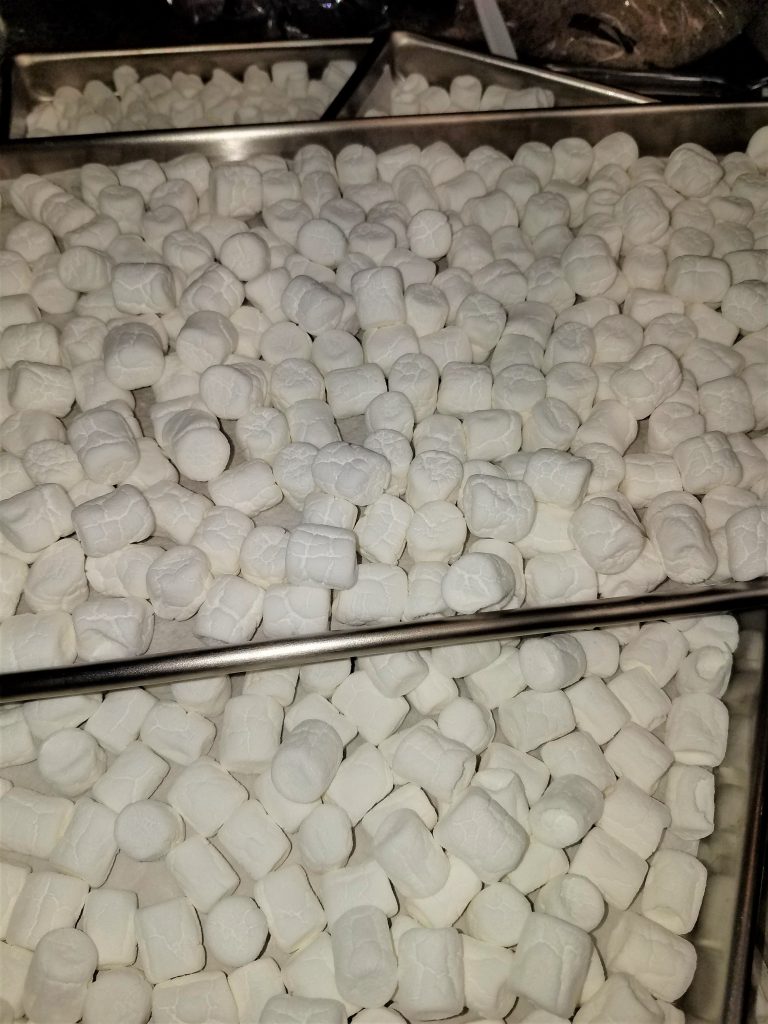 Candy isn’t one of the foods that needs to be reconstituted. Instead, you’ll eat them like a funner version of the original candies.

How do I freeze dry candies?

Then a vacuum pump turns on and creates a vacuum inside the drum. This is the drying stage and will vacillate the heat of the tray up and down to a pretty warm temperature. This makes the frozen items release any water in them in vapor form. The vacuum sucks the moisture to the drum and this collects in ice form on the inner circle of the drum.

What settings do I use for freeze drying candy?

On the Harvest Right freeze drier – this works on all sizes – after putting the trays inside the drum on the shelves, I put in the drum cover and then tighten the handle as I lock it shut. On the computer touch screen, I selected START > NON-LIQUID > NOT FROZEN > CONTINUE. After inputting the settings and making sure my drain tube was closed, I walked away.

This was so much fun!