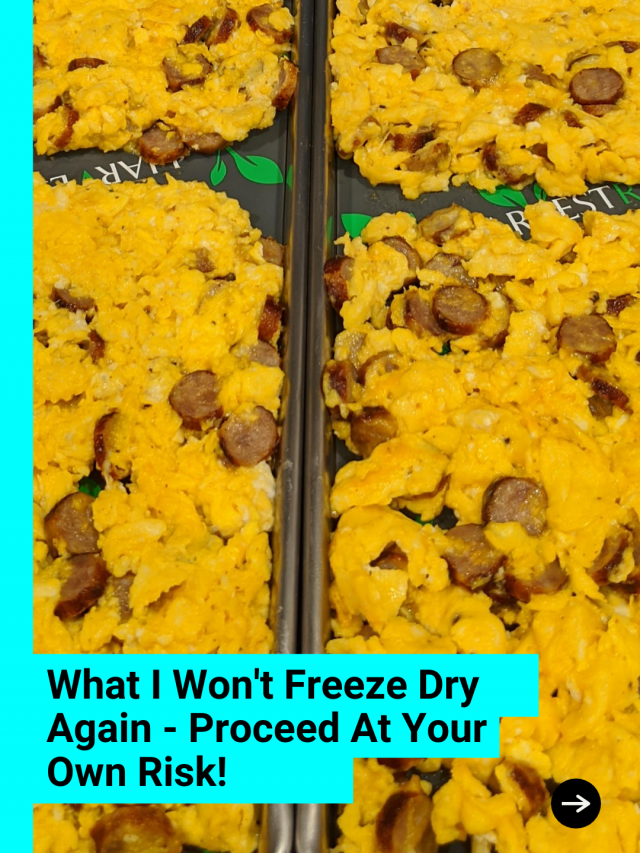 You Don’t Want To Freeze Dry These! 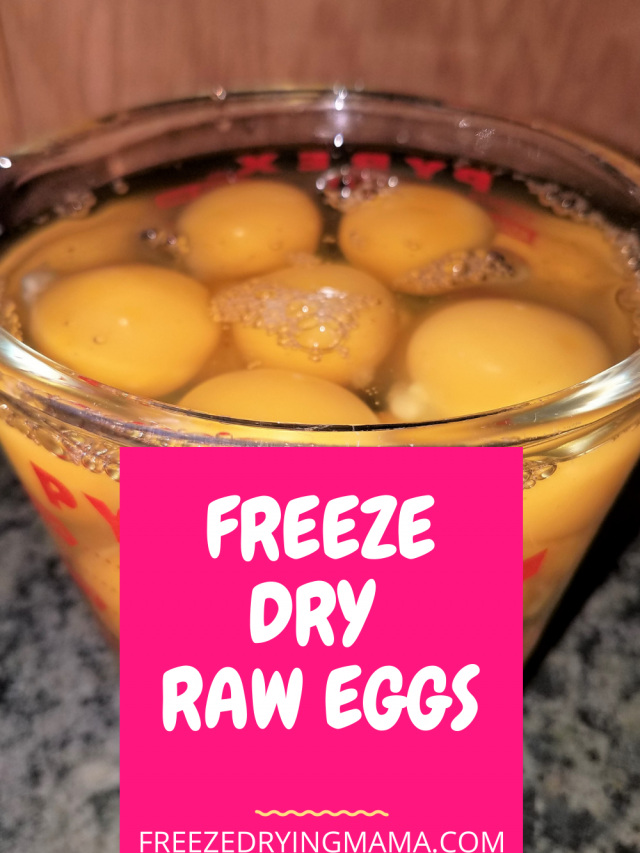 How To Freeze Dry Raw Eggs 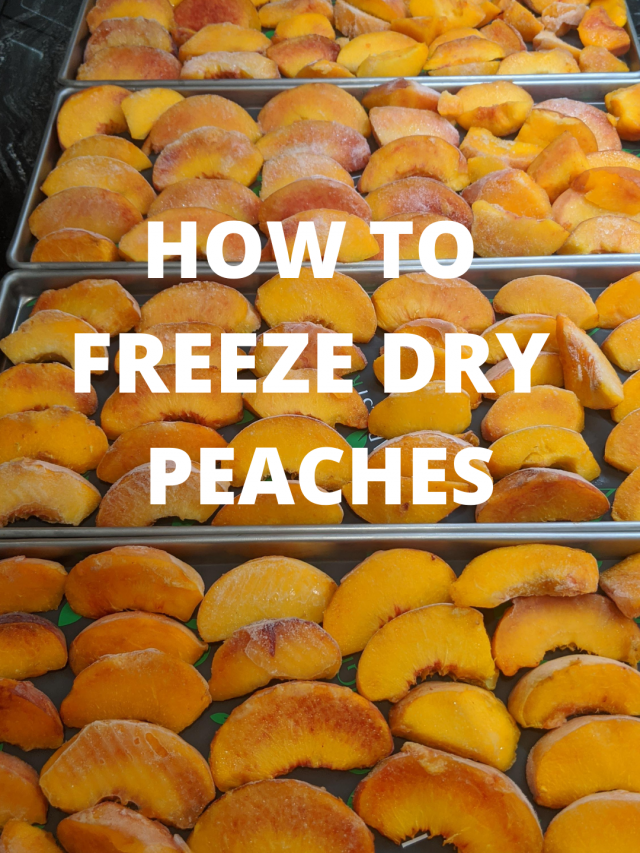 Things Are Good To Try

Some things you won’t want to try again. There are some things I won’t freeze dry again.

Years ago in college I took up sky diving. I had a Canadian friend who wanted to start a college Sky Diving Club. So, we did. I was the first girl to jump. Wow, what a rush!

Then, a few years later I became a wife and a mother…. that turns you into a bit of a wuss–no more jumping out of planes! But, I had one son (Bonnie’s husband) who would always tell me that he wanted to sky dive. No mother wants to hear that from her little guys, so I’d tell him: “No, there’s lots of other things you can do with your life.”

Well, next thing he knew, he was a husband and a dad of 6, but apparently he had expressed that desire to his wife. So for a special birthday, Bonnie bought him a sky diving adventure! At this point, being a responsible father, that experience wasn’t near what he thought it would be and he said he would NEVER do that again!

Thinking about things I would never do again, reminded me of a freeze drying question my brother asked me a while back.

Is there anything you would never freeze dry again?

I’ve been freeze drying with my HarvestRight for just over a year now and I thought back on the many different things I have tried to freeze dry. And, no, they were not ALL successful. When that happens, you tell yourself that you’ll never do it again!

Can I Freeze Dry Sausage? 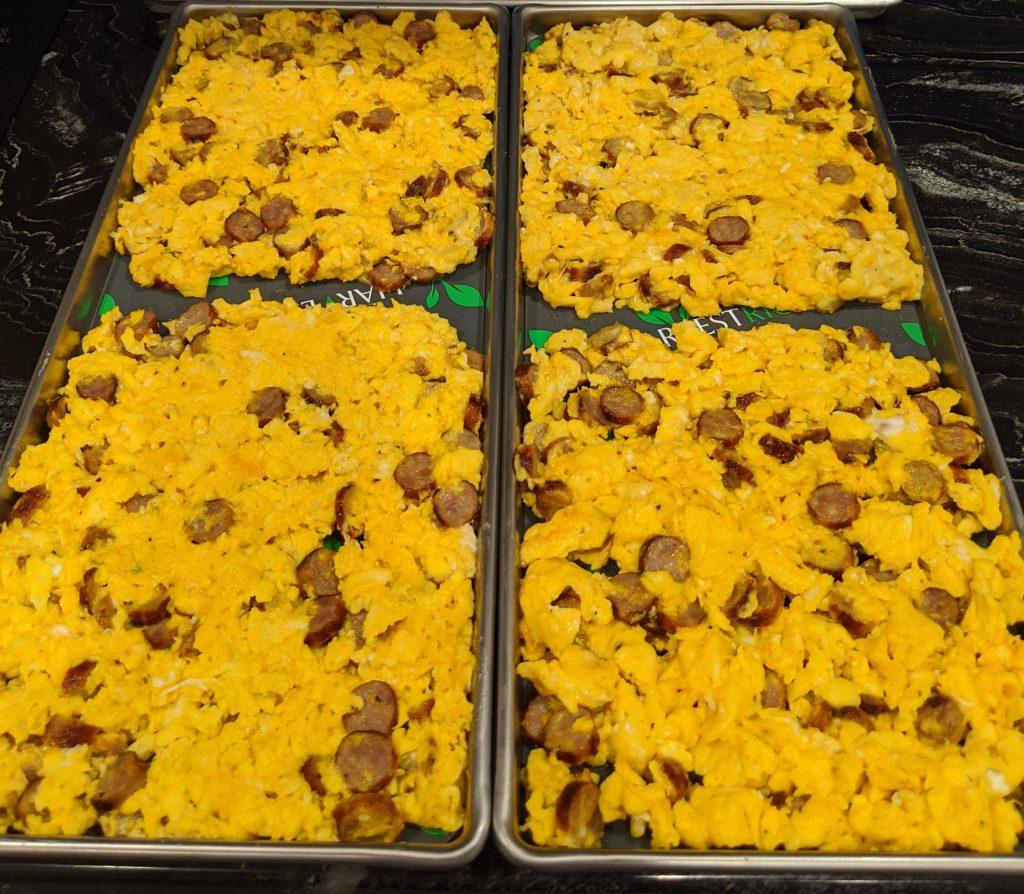 One of the first things I tried, was slicing cooked pork sausage links into scrambled eggs. They were tiny, 1/8″ slices. They did freeze dry great mixed with the eggs, and they were ready to eat just as they were. 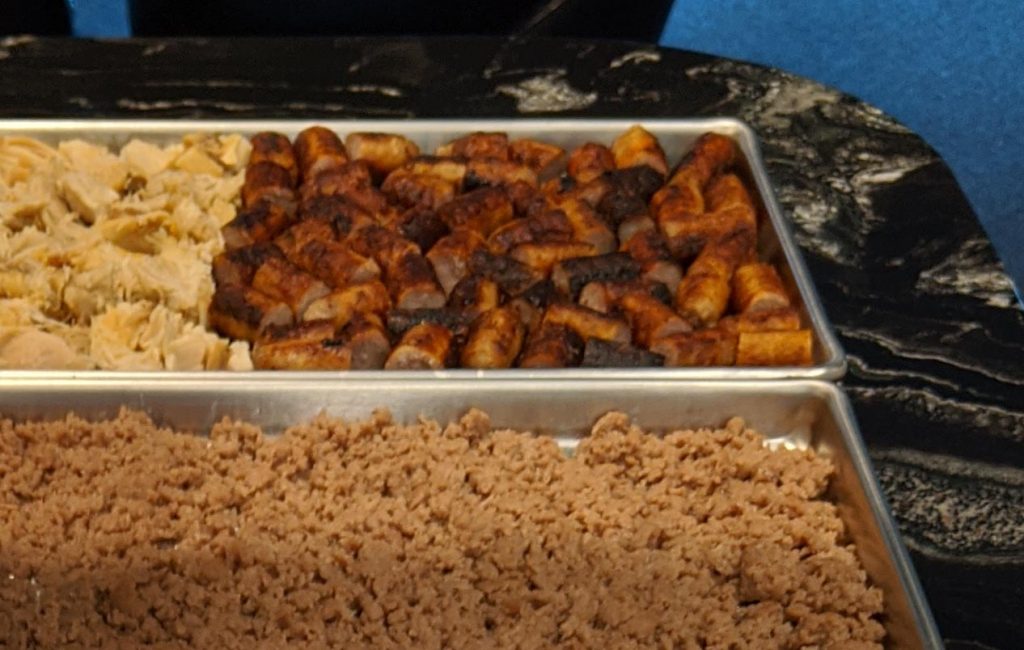 But, I had left over sausage and I thought they would make a nice snack, so I cut the link’s into 3/4″ slices to freeze dry. They turned out hard as rocks, took forever to reconstitute and were still hard. So, apparently they have too much fat content to freeze dry. Unless it’s tiny sliced pieces cooked with the eggs, I will never do pork link sausage again!

Can I Freeze Dry Kielbasa? 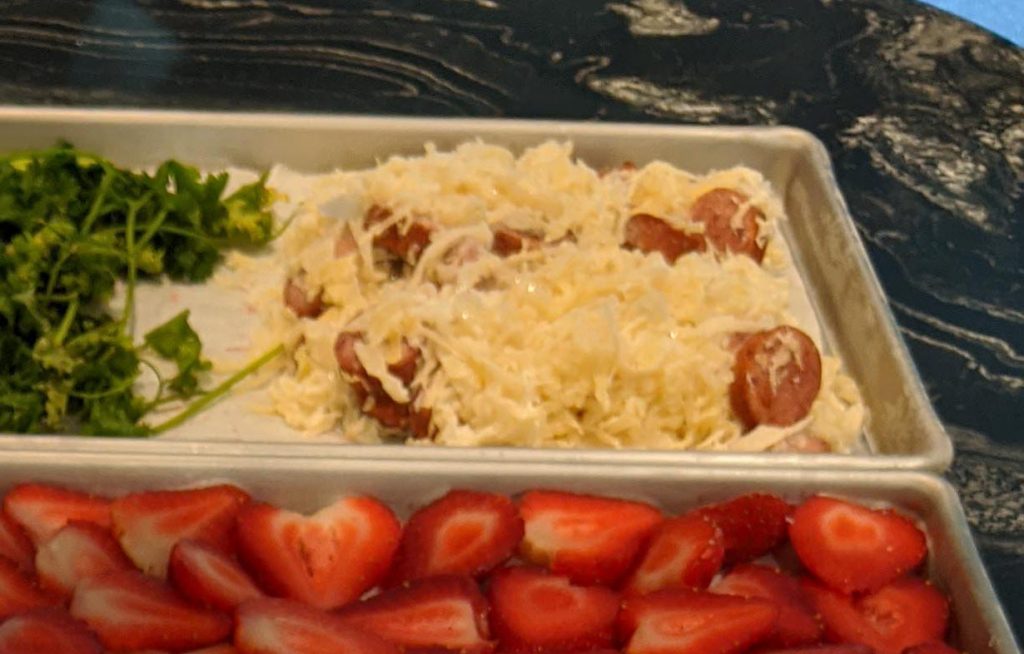 Another meal I tried was Sauerkraut and Wieners using Kielbasa, which normally we love! The sauerkraut does great being freeze dried, but the Kielbasa does not! It, like the sausage has too much fat. I will never freeze dry Kielbasa again!

Can I Freeze Dry Gravy? 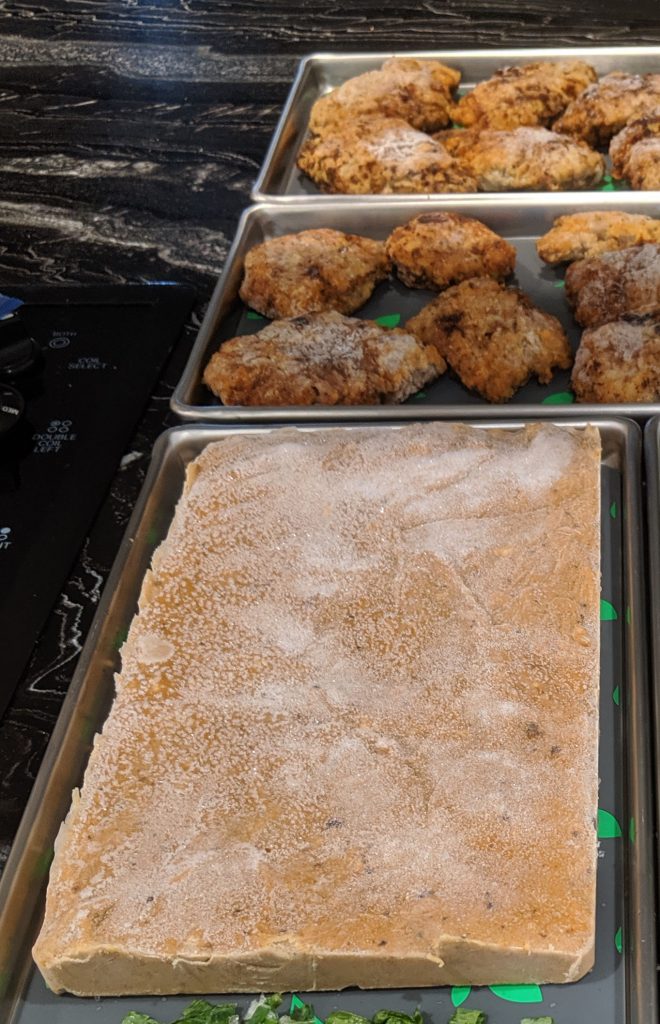 I’ll never do gravy again! Of course it’s made with butter or grease from meat and has too much fat–it won’t freeze dry!

Can I Freeze Dry Apple Slices? 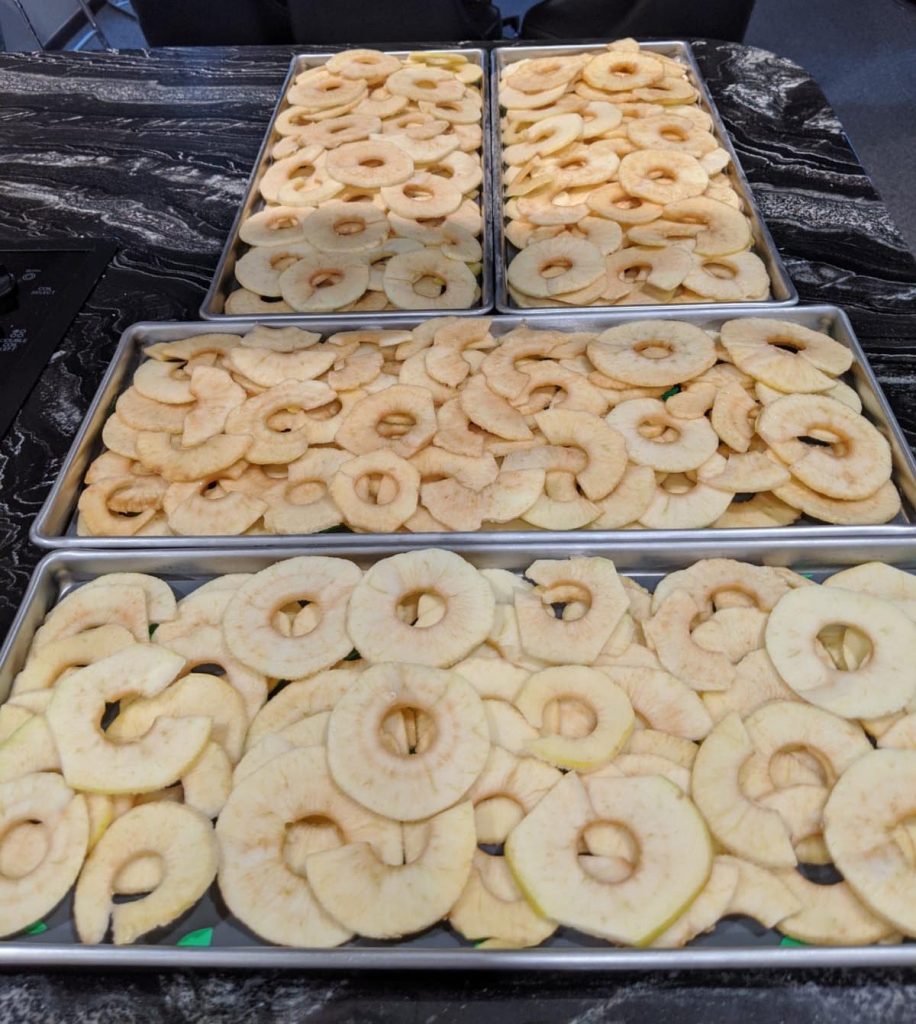 I’ll never do spirolized apple slices again! They may be thin, but stacked, they are too thick. If laid single or double even, might be okay. I think I’ll stick with wedges!

Can I Freeze Dry Sour Cream?

Bonnie had a bad experience with sour cream the first time she tried it. It just went all over inside her HarvestRight and made THE WORST MESS! She thought it might have too much fat and said she would never do sour cream again! 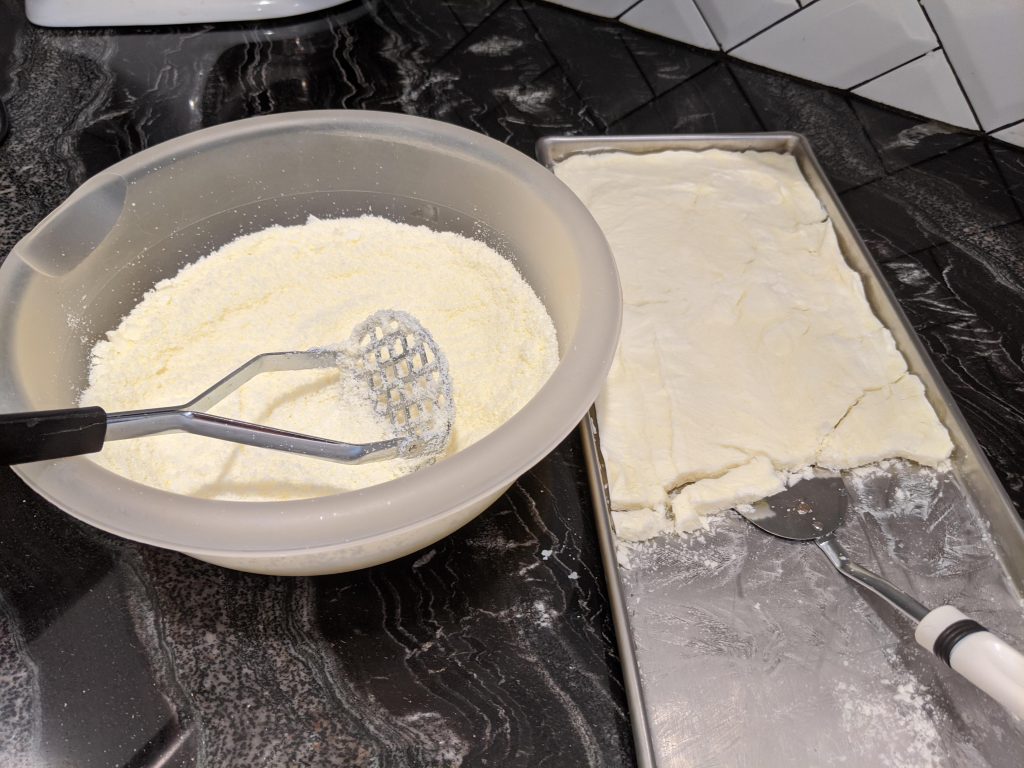 BUT, I tried it and froze it on my trays for a full 24 hours and it turned out perfect. It goes into a nice soft fluffy powder and reconstitutes perfectly.

I, shortly after her experience and before we each learned this valuable lesson, tried to freeze dry raw eggs without pre-freezing. Not knowing how to best go about it, I had the same result: a huge, sticky mess all through my freeze drying chamber, all over the trays and shelves. I even had egg in my oil! I said I would never do eggs again! 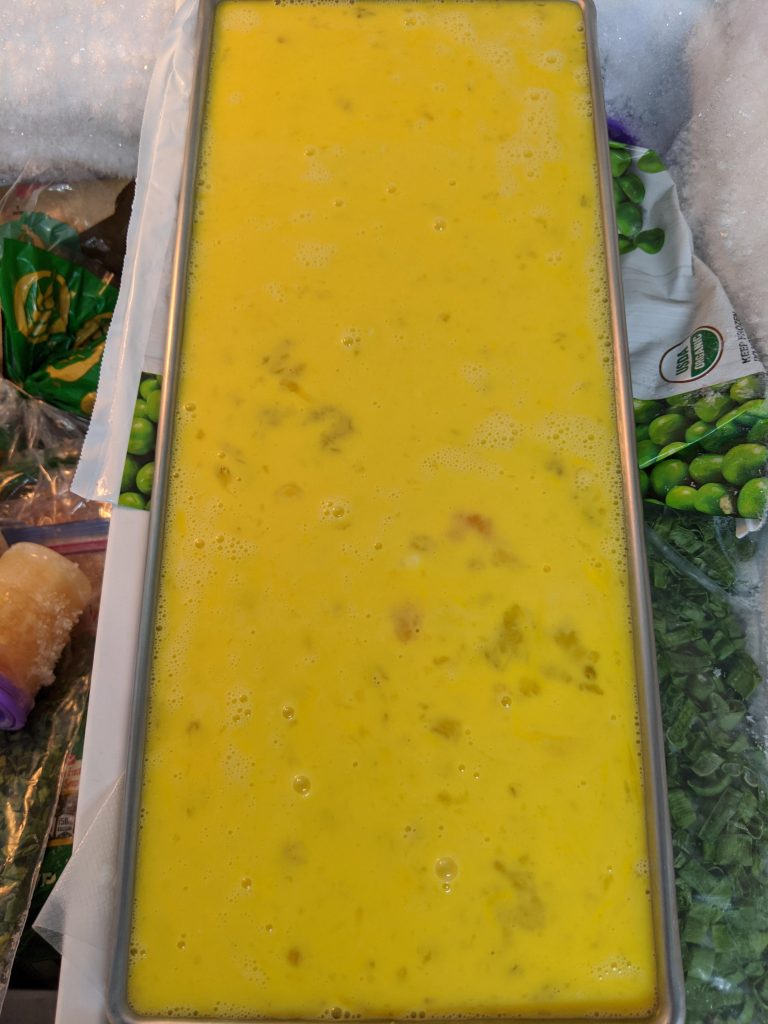 Bonnie taught me that you HAVE to freeze your raw eggs on the trays first, as well. So, now I have a level spot in an upright freezer where I can stagger my trays on top of each other while the egg freezes solid. They turn out great.

You’ll only clean up a mess like that in your freeze dryer once!

From then on, you know to pre-freeze any liquids or semi-liquids like tomato sauce, etc. Actually, I consider things like tomato sauce a liquid as far as setting my machine. It has an incredible amount of liquid in it!

Can I Freeze Dry Sliced Avocados? 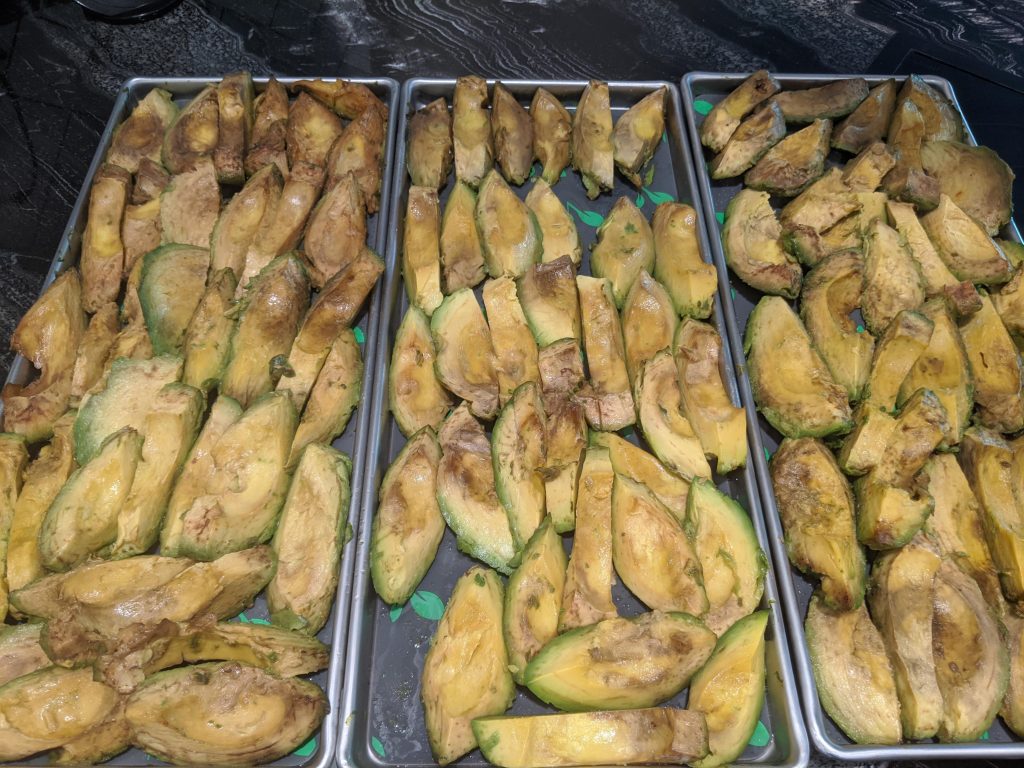 I did some sliced avocado, but was NOT impressed with the taste or the look. It turns dark, even after spraying lemon juice on it. I had already done several trays and they looked awful! 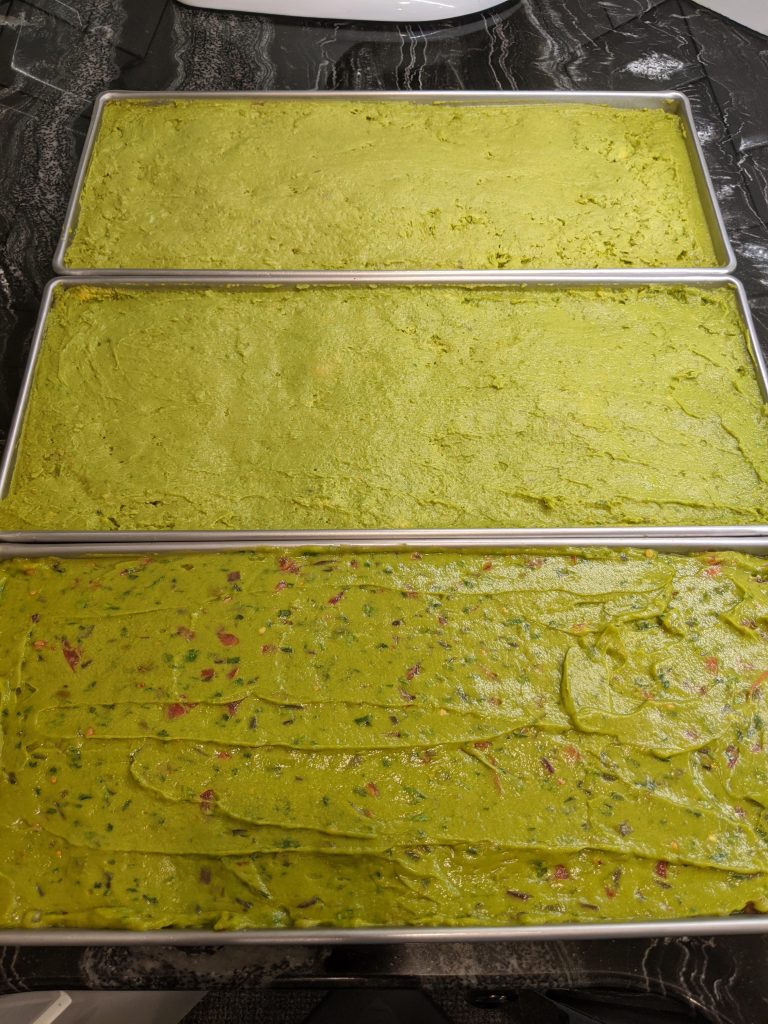 So, I took them out of the freezer before they were completely frozen and mixed them up with my Kitchen Aid cookie dough hook. They turned nice and green again. I made them into guacamole and mashed avocado and dried both into a powder. It rehydrates into a nice creamy consistency. I’ll never do avocado slices again!

Can I Freeze Dry Grapes? 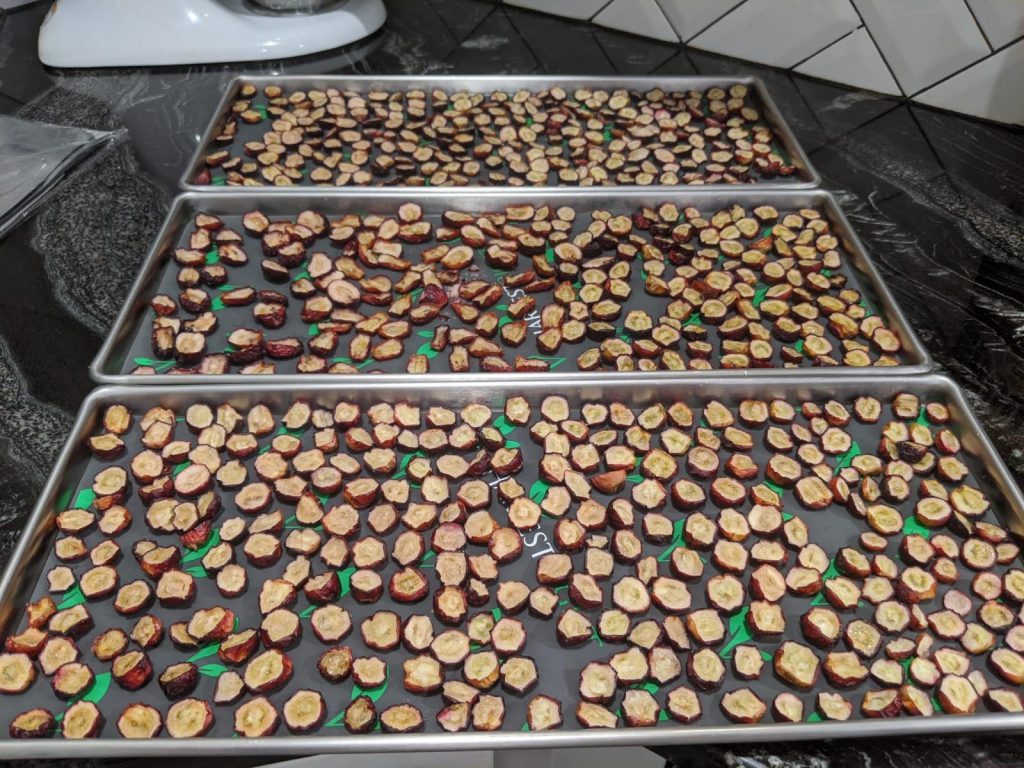 Another thing that I nearly swore off of is red grapes…..but, I realized it was because I left them too long and they were waaay ripe and of course that causes them to go sweeter–more sugar. Red grapes are an amazing snack/treat, but do them while they are still very fresh and not overly ripe. I just slice them in half (their skins are tough) and they take about 60 hours, but I still think they are worth doing. Put them in during a busy week and your machine will do the work and free up your time.

Actually doing any fruit or berries that are over-ripe can either take forever or just not turn out as nice.

I tried Anjou and Bosc pears for the first time this year. They are crisp, almost like a cross between an apple and a pear. I am glad that I did them and I’m glad I have several bags freeze dried and ready to eat. After freeze drying, they have a more intense flavor than before, but, they’re not amazingly flavorful like Bartlett pears are. So I don’t think I will do them again. You always want to make sure you do things that your family loves.

Can I Freeze Dry Jello? 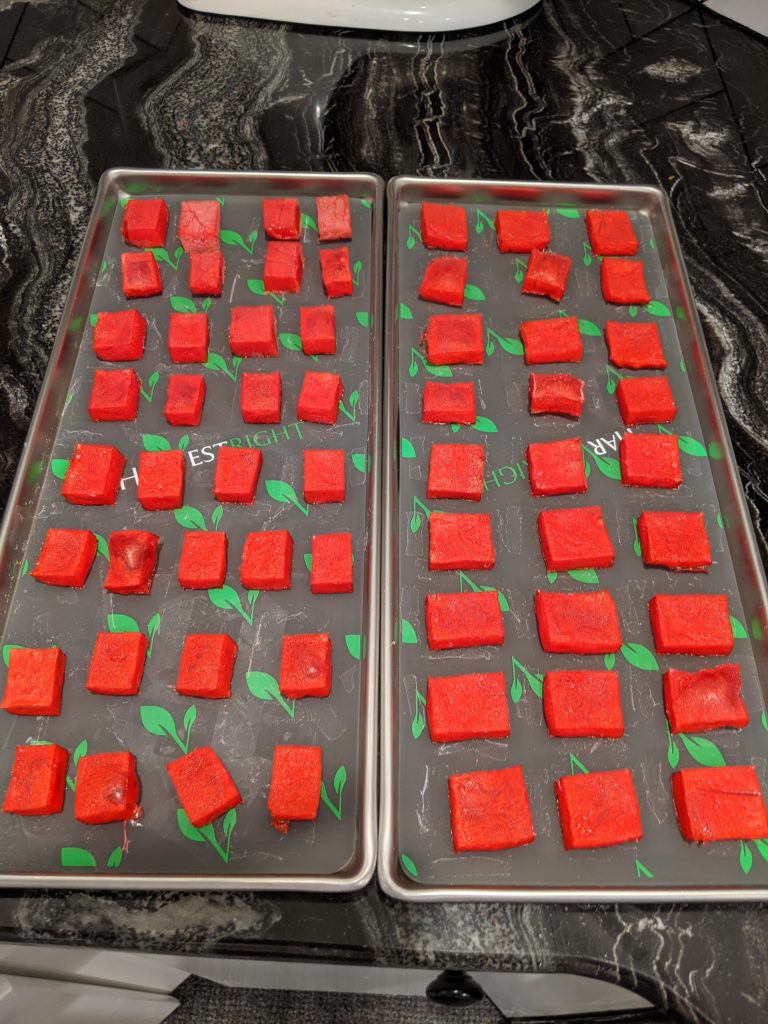 I won’t do regular finger Jell-O again. The sugar-free turned out much better!

I’ve had fun doing candies. The latest thing I tried, without success was Gumi Sweetarts. They popped open like Skittles, but just didn’t dry inside after 36 hours. They were still gummy. I have so much fruit prepped in my freezer that I didn’t want to pursue it further right then, but if I have something that needs a little more final dry, I may scoot it over, add the Sweetarts and see what happens one more time. As it stands now, they are in the category of not doing them again.

I suppose in some cases we should NEVER say NEVER, huh? 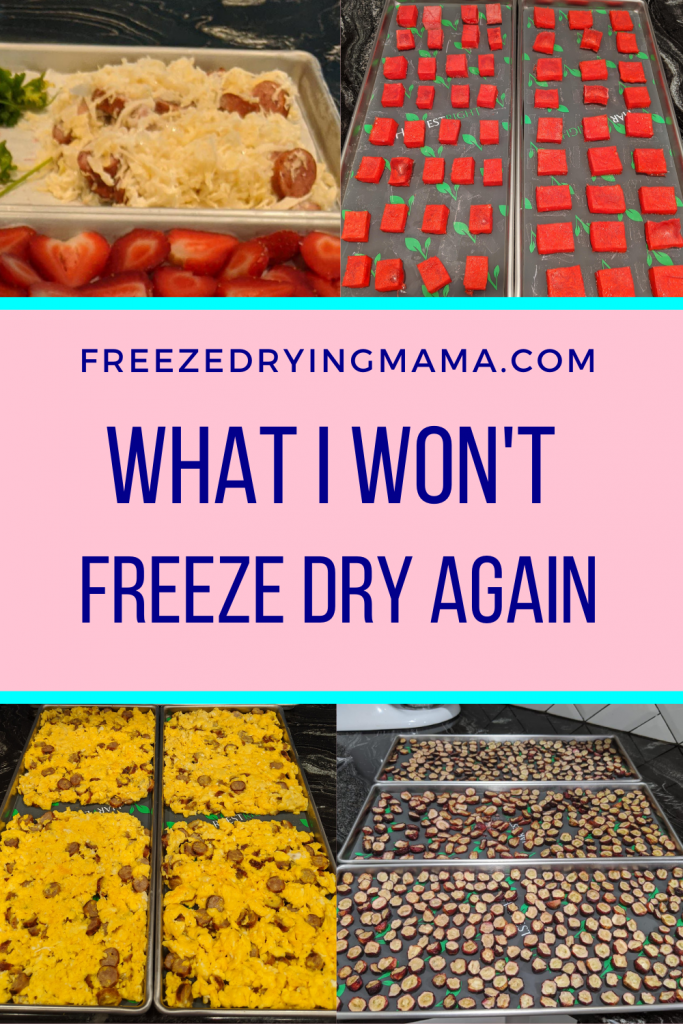 Previous Post: « How To Freeze Dry Dairy
Next Post: Announcing the How to Freeze Dry For Beginners Book »